*This is a guest post from a friend, Chad “Tsadiktus” Mercado*

When I was asked by my friends, whom I invited for this trip, on what we are going to do on the island, I definitely didn’t know what to answer, so I just said – “you know, the usual, appreciating mother nature’s beauty while reflecting on what’s currently happening with your life.” But seriously, there’s nothing much to do in the island, aside from the usual diving or snorkelling activity. So why did we still choose this place despite the expected long travel and hassle? Well, simply because the island itself, for me, is like a paradise, and i believe, beneath this island lies another paradise – the underwater kingdom, and above all these is our great paradise. 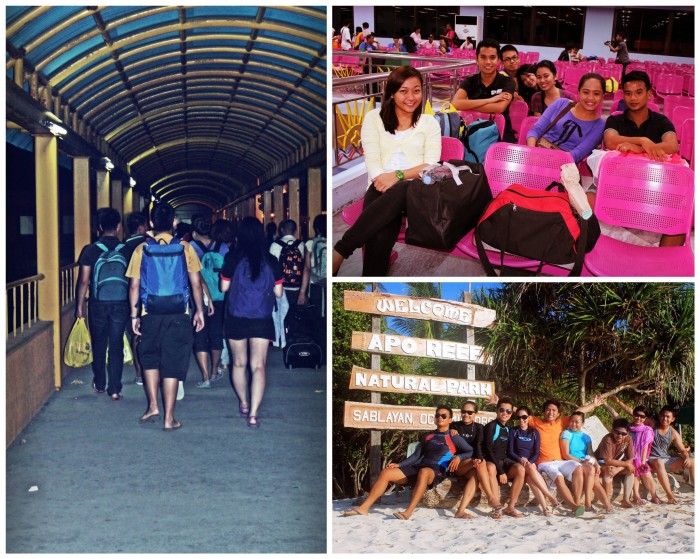 Apo Reef Island, situated in the municipality of Sablayan, province of Occidental Mindoro, is the world’s second largest coral reef system, next to Australia’s Great Barrier Reef. It took us twelve (12) hours to get there from Manila via land-sea travel. Upon arrival on the island at around 11 in the morning, we can’t help but admire its pristine beauty, despite the sun’s extreme heat. The crystal clear water – where you can definitely see the kingdom beneath you; the white sand – perfectly scattered and adorned with the turquoise-colored surroundings; the fresh sea air – with its warmness that soothed our tired body; and the time – yes, the time! I still don’t know how it became possible for the time to tick so slowly when we were there; that you have all the extra time to appreciate and picture in your mind the island’s priceless beauty. 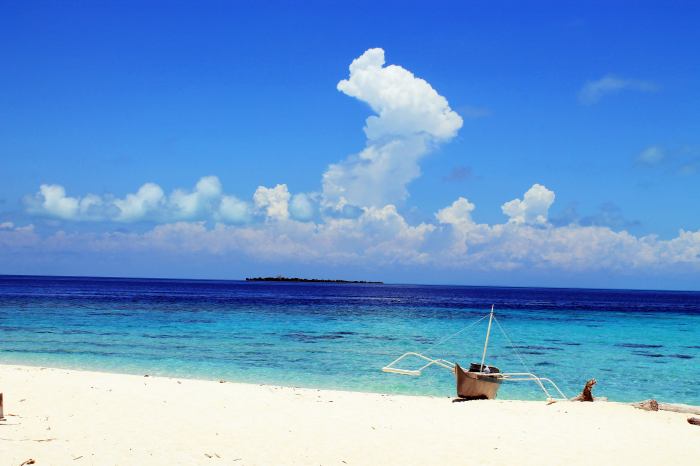 After lunch, we visited Libuao Lake and Siburan Forest for a supposed “balsa” ride, but unfortunately (which eventually turned out to be fortunate for us), this only “balsa” was missing… As we do not want to waste our time sitting our butt for the entire afternoon, we decided to cross the lake through the bakawan trees, which we named “the Bakawan trek”. As per our tour guide, such a trek has not been done during his entire life on the island; so I guess, we were lucky to be the pioneers of this activity. 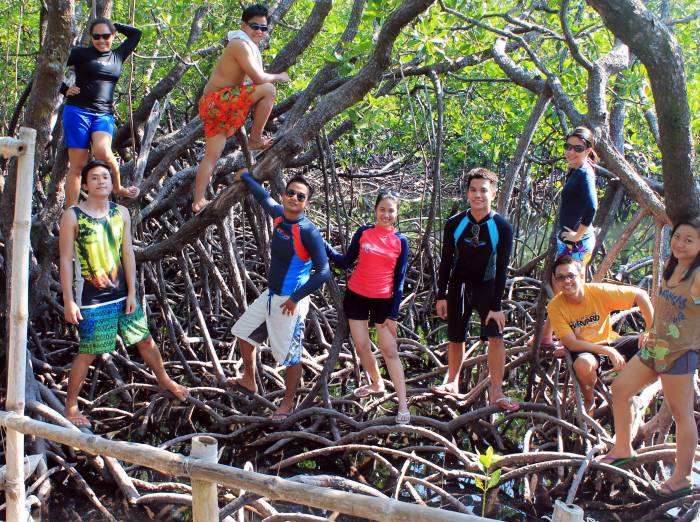 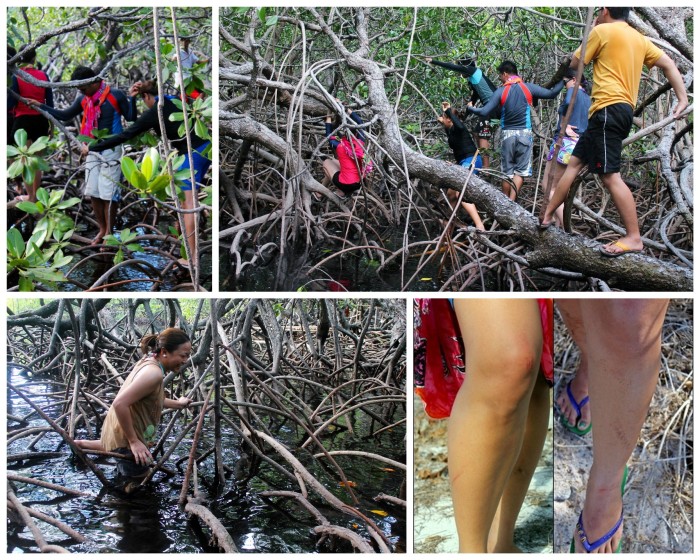 Afterwards, we climbed the Apo Reef Lighthouse, where we had a 360-degree unhindered view of the island – and it was breathtaking!

We stayed at the lighthouse for the next few hours to witness the sun, as it slowly hid behind the horizon, while the sky started to bleed upon the sun’s disappearance (and suddenly, I realized, maybe, the sunset’s color was bloody because the cloud is crying as she was left alone by the sun). 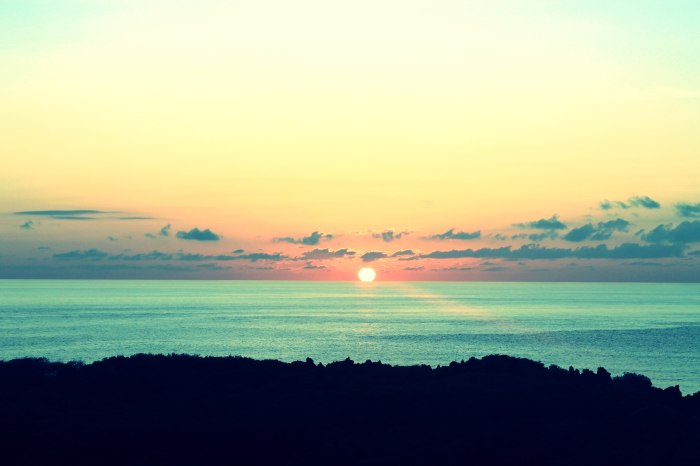 There are no rooms for rent on the island, so we rented tents instead, where we spent our night. Stocks of fresh water are limited as well, so we just used our bath towels to clean up.

This magnificent view of the sunrise greeted us when we opened our eyes the next day. (The cloud’s bleeding again – well, blood could mean happiness as well, couldn’t it?)

Our snorkeling activity was scheduled during the second day, as our tour guide suggested that the best time to do it was during the morning, when all the fish are in the snorkeling area. The snorkeling here was kinda unique – as you are being dragged slowly by a pumpboat while holding on a rope or on the boat’s bamboo frame – which gave us the opportunity to explore, if not the entire but most of the island’s diving area.

The view underwater was kinda unique as well, as the fish herein are in the kind of sharks – the baby one, and other big fish (which I do not recognize), and big coral reefs. We’ve actually seen Patrick’s home, and we’ve tried to look for the pineapple one hoping to see Spongebob, but I guess it must have been placed somewhere else.

After some beach bumming, we left at around nine (9) in the morning, thinking we still have the Pandan Island tour. But sadly, the tour there needs another reservation (and fees as well) as this was privately-owned. So we decided to not visit the place, since we do not intend to spend another night in there. 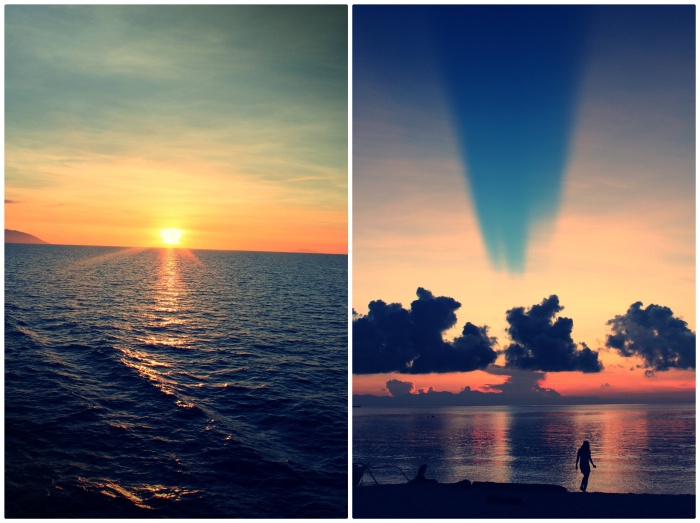 By the way, Apo Reef Island is administered as a National Park, and basically, tours are controlled by the tourism department of the municipality, which is a good thing to avoid any scams and/or unjust fees. We had our reservations weeks before our travel, which is a must. You can send them an email for reservations and tour rates at amazingsablayan@yahoo.com. As mentioned earlier, there are limited stocks of fresh water in the island, good thing you can take a bath in the ecotourism office before leaving Sablayan.

My Afterthoughts:
You see, there are places that you have visited which you considered a paradise — where you want to spend eternity. However, you can’t also get rid of the fact that the said visit may be your last, after considering some other matters. That’s how I see Apo Reef Island. For me, it’s not a place where you can normally spend your summer vacations or make it your secret haven. That’s why I’m concluding, maybe, paradise is really designed that way – something you cannot take for granted. So once you visit Apo Reef, make sure you appreciate every second of your stay there, or else, you might regret it.

Chad is one of those Philippine-based well-traveled friends I know of. He’s been to most places in the Philippines (pakalat-kalat eh!); went as far as Abra up north, and Zamboanga down south. We’ve also traveled together before; read my posts on Mt. Batulao, Mt. Talamitam, Ifugao’s Batad Rice Terraces, Sagada’s Bomod-ok Falls, Sagada’s Sumaging Cave, Baguio City, Semirara Beaches and Semirara’s Unong Lake. Looking forward to more posts from him (pressure!!! =p), and oh well, looking forward to some collaborated travels with him in the future (if my schedule and budget would allow me to, then why not! haha!).

Camiguin (Part 2 of 2): Two Islands, A Waterfall and Our Sun-kissed Skin

CORON: Island Hopping and Snorkeling Even if it’s Raining!