Prenup photoshoots are not actually a thing here in the UK (apparently) – this is probably very much an Asian thing to do. However, since our photo+video package as well as our hair&makeup included the prenup shoot, Phil and I went for it!

3 days before our big day was our scheduled photoshoot – we weren’t that prepared, although we had a few ideas in mind. We didn’t prepare much for the outfit so whatever we brought with us in our suitcases, we made do for this photoshoot. :p Heck, after all, we are made for spontaneity (or maybe not). 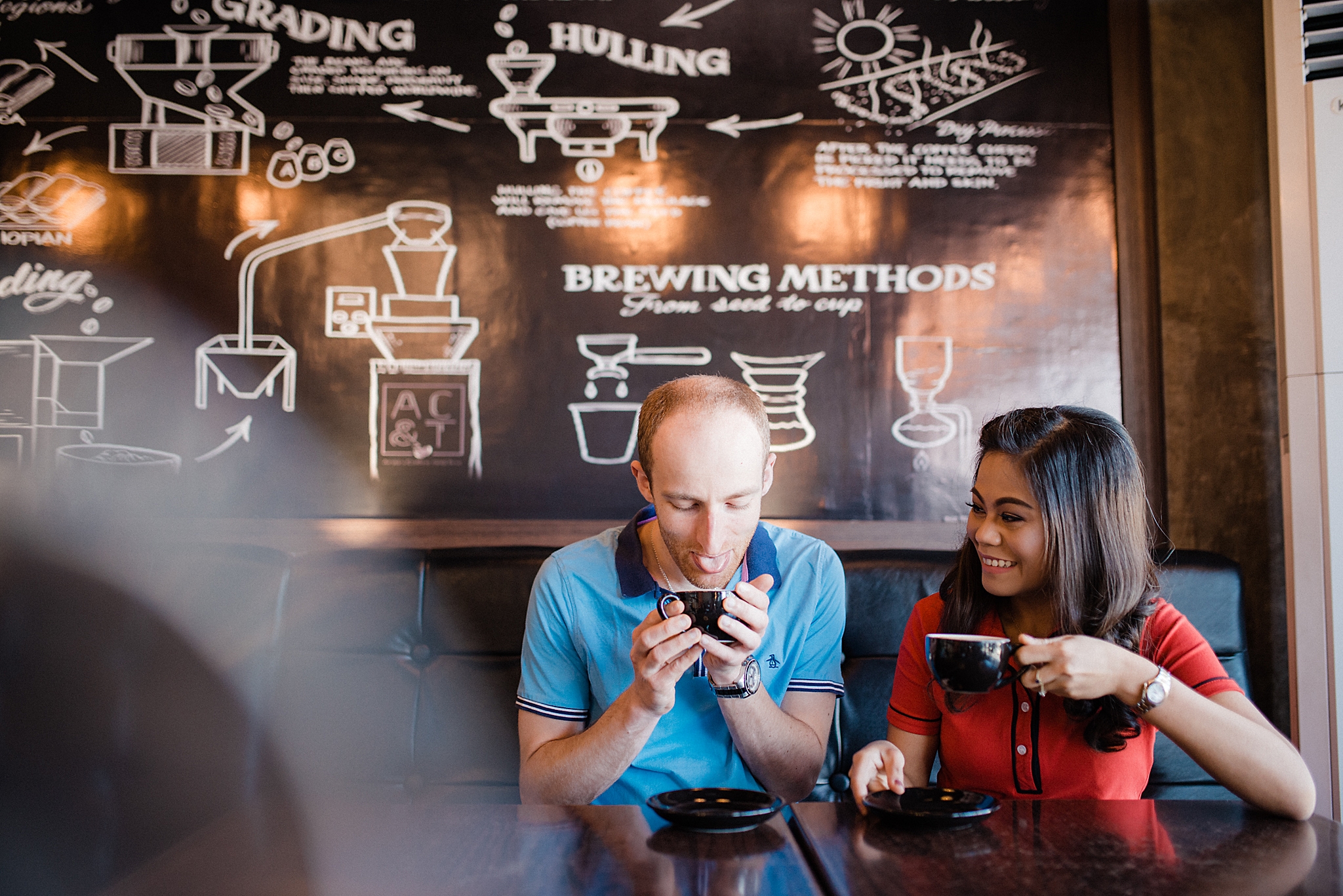 Phil and I first met in a coffee shop, I mean physically meet. Hence, one of the locations we thought to do the photoshoot was in a coffee shop – the more vintage the place looks, the better. Arya happened to be the suggestion of our coordinator and so here it is.

We were both in dire need for caffeine – I flew in from Manila this day on a very early flight, without proper sleep because I mainly stayed at the Ninoy Aquino International Airport (NAIA) for the night, after a daytrip in Manila to apply for my South Korean visa. Phil didn’t sleep well, too, because, yeah well because I wasn’t there with him. :) 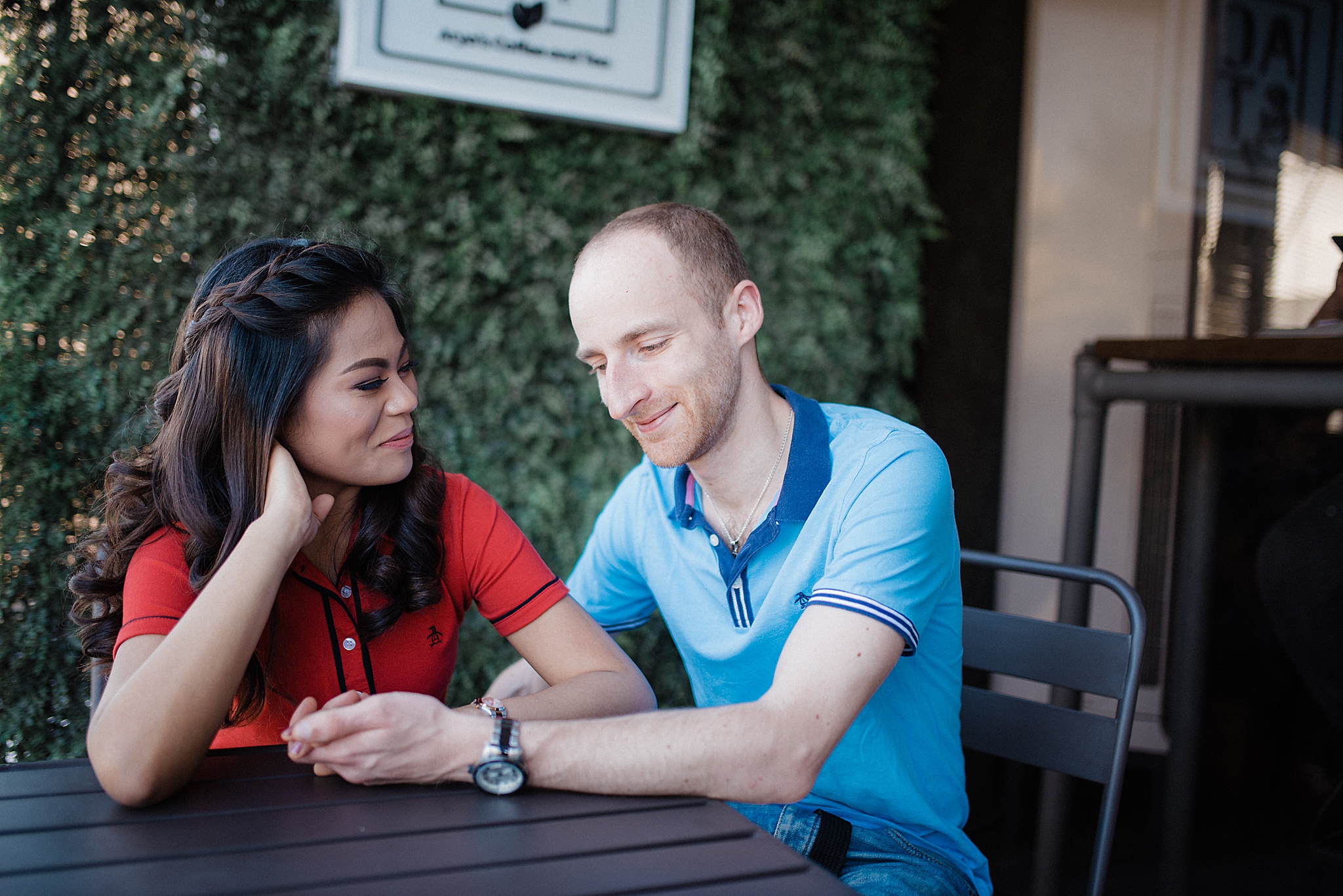 The location didn’t disappoint. Although we didn’t rent the entire space exclusively, we were still able to use a private area of the cafe for the shoot. A bit awkward though as there were other people around, but we got through it! ahaha! 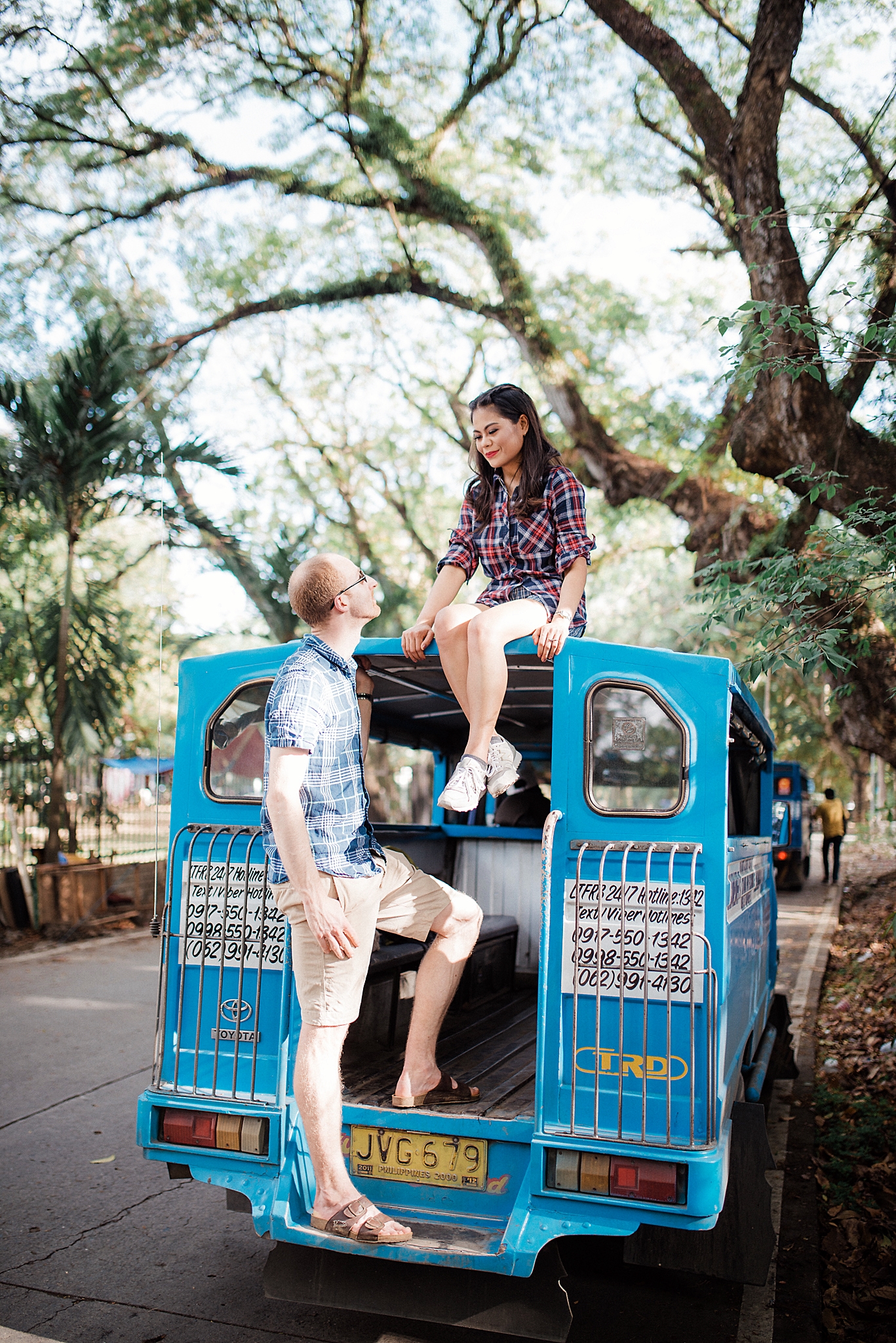 One of the prenup photoshoots I like was that of Iya and Drew – laid back, outdoorsy, kind of travel-themed, and fun. I remembered they had this one photo where they were on top of an old school SUV chilling. I kind of wanted the same – too bad we couldn’t find a similar vehicle (or I was thinking of a VW camper van). And we didn’t want to go through the hassle of finding/renting one… 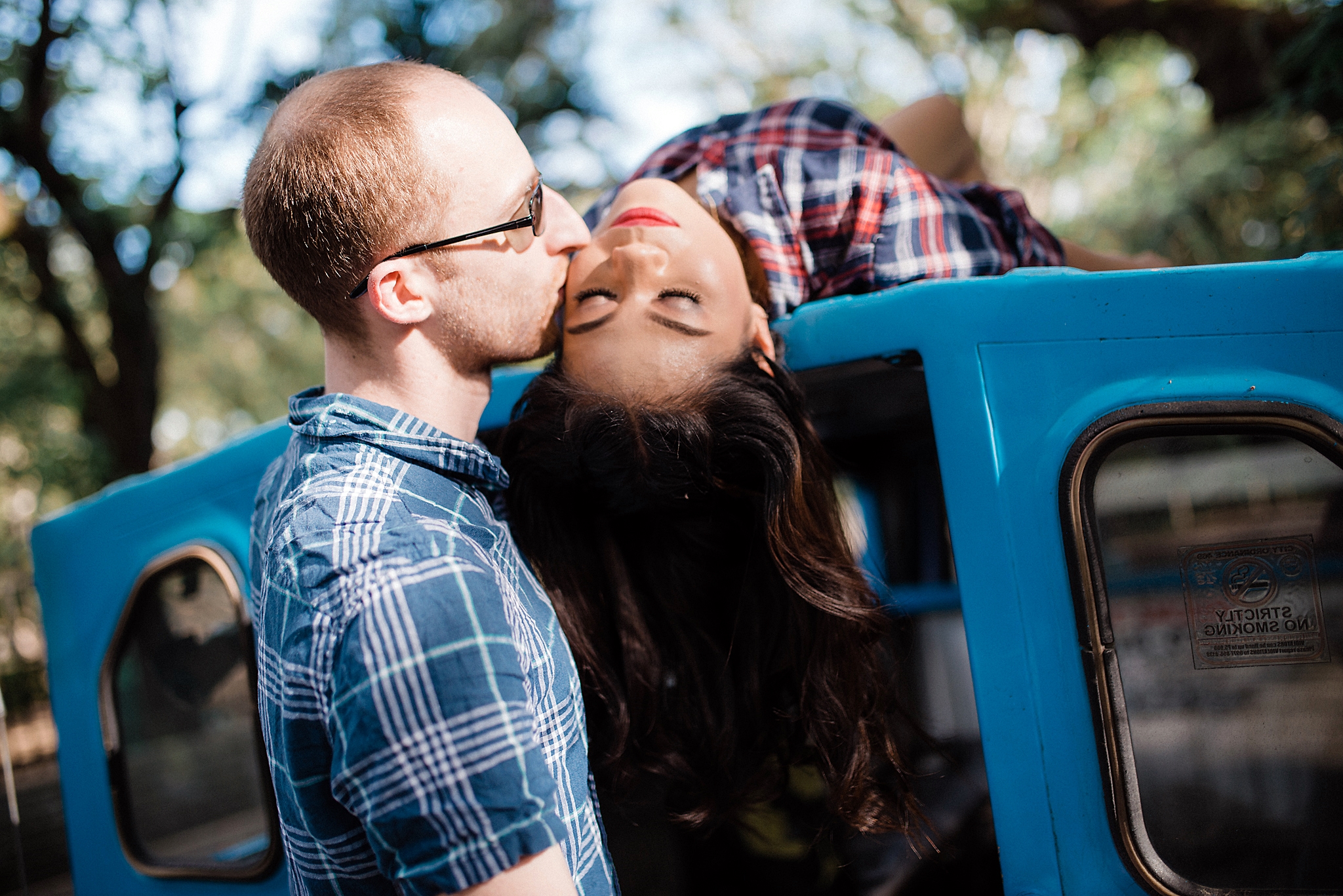 …so I thought why not use a jeepney! Our coordinator was able to find one whilst we were at Pasonanca Park – we just had to pay (200 Pesos I think?) the driver for a few minutes of use of the jeepney. :D 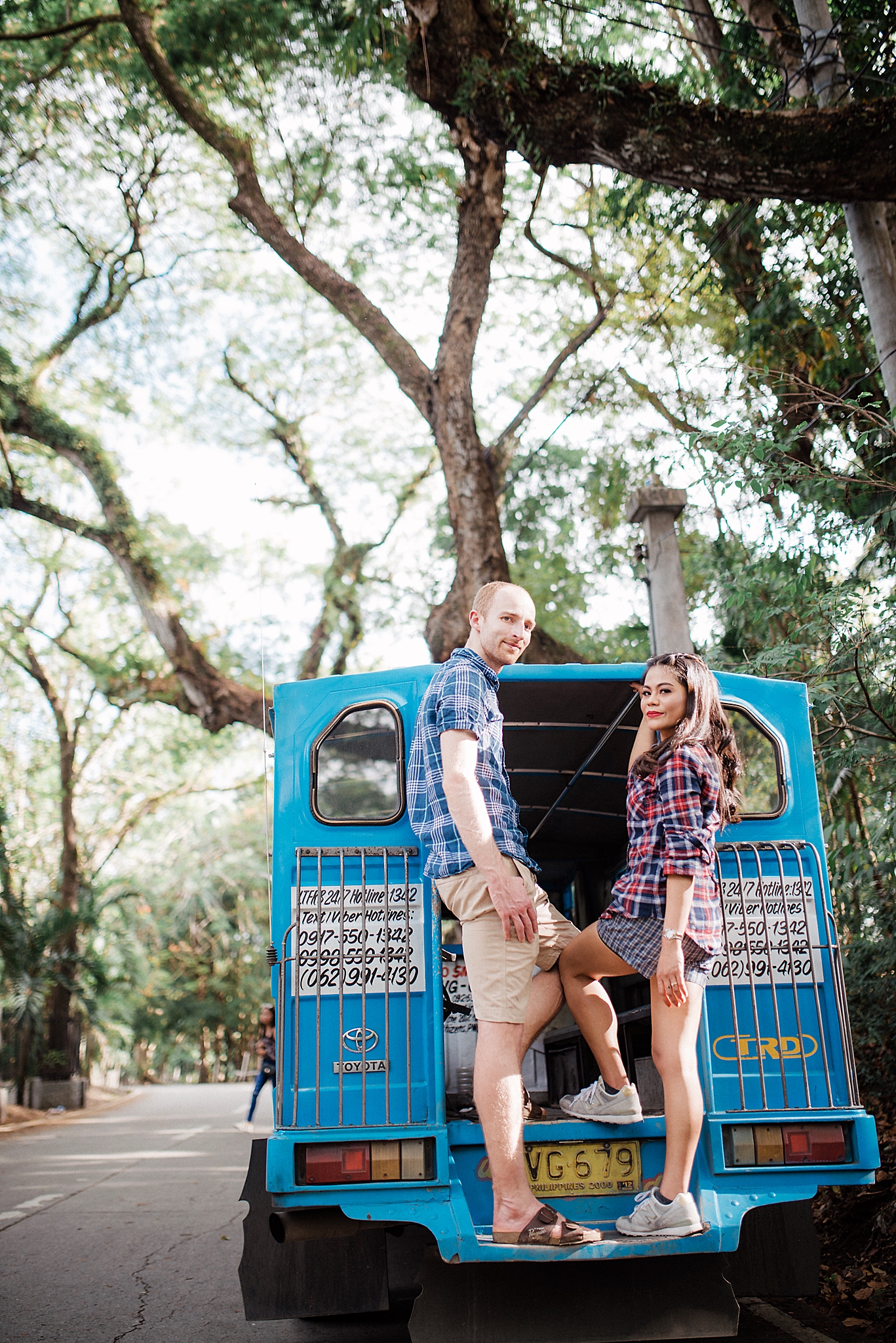 And some more photos – these were taken somewhere in Pasonanca Park, whilst we were waiting for the jeepney.

The glam team and our wedding coordinator were wondering whether we brought a long-flowing gown for the shoot and/or a fancy pair of sandals. I said nah. We’ll make do of what we have. 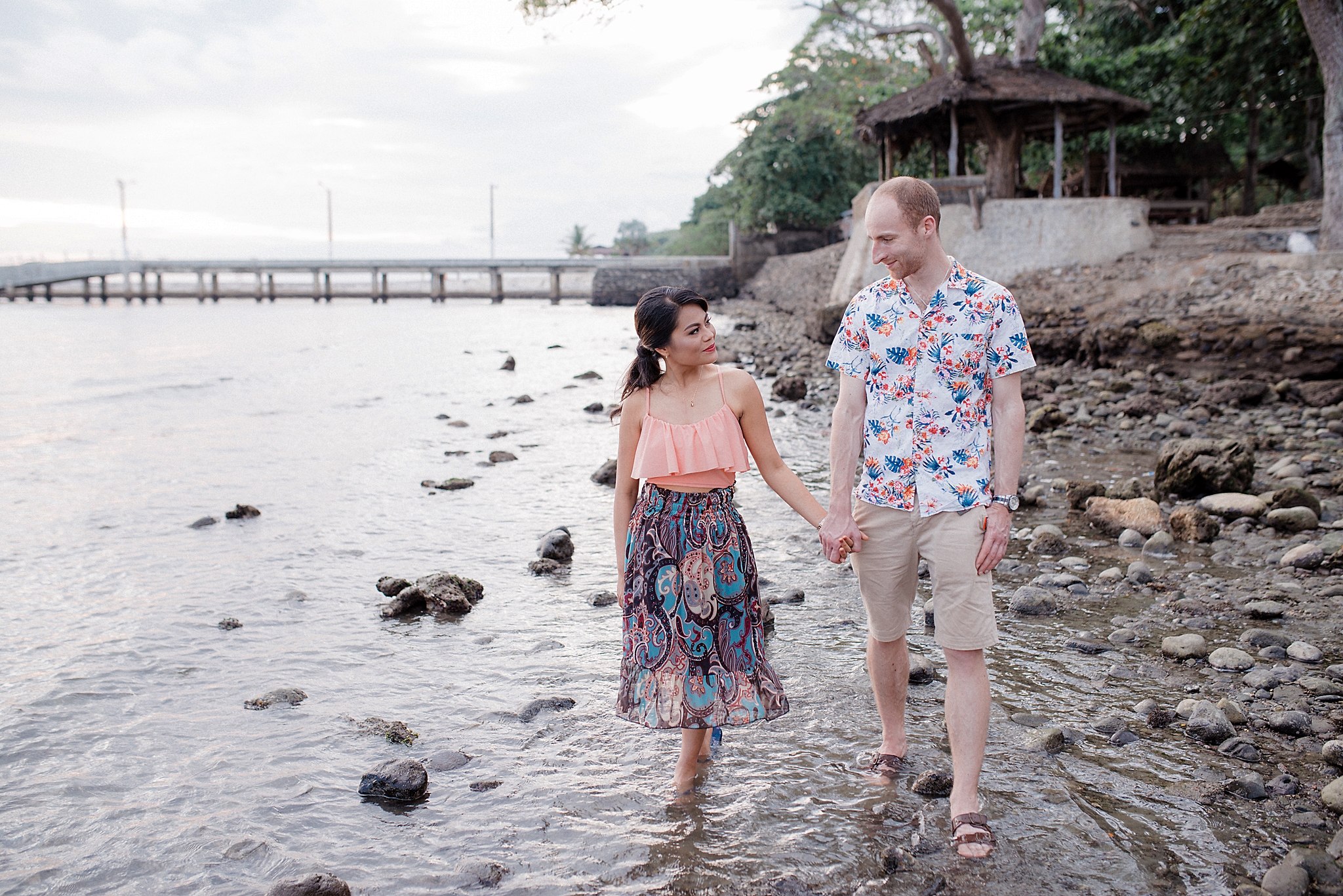 We were waiting for the sunset here but we were not that lucky. To be honest, by this time, we were already pretty tired and we just wanted this photoshoot to be over. I was actually napping in the van whilst we drove between locations – I was that knackered! 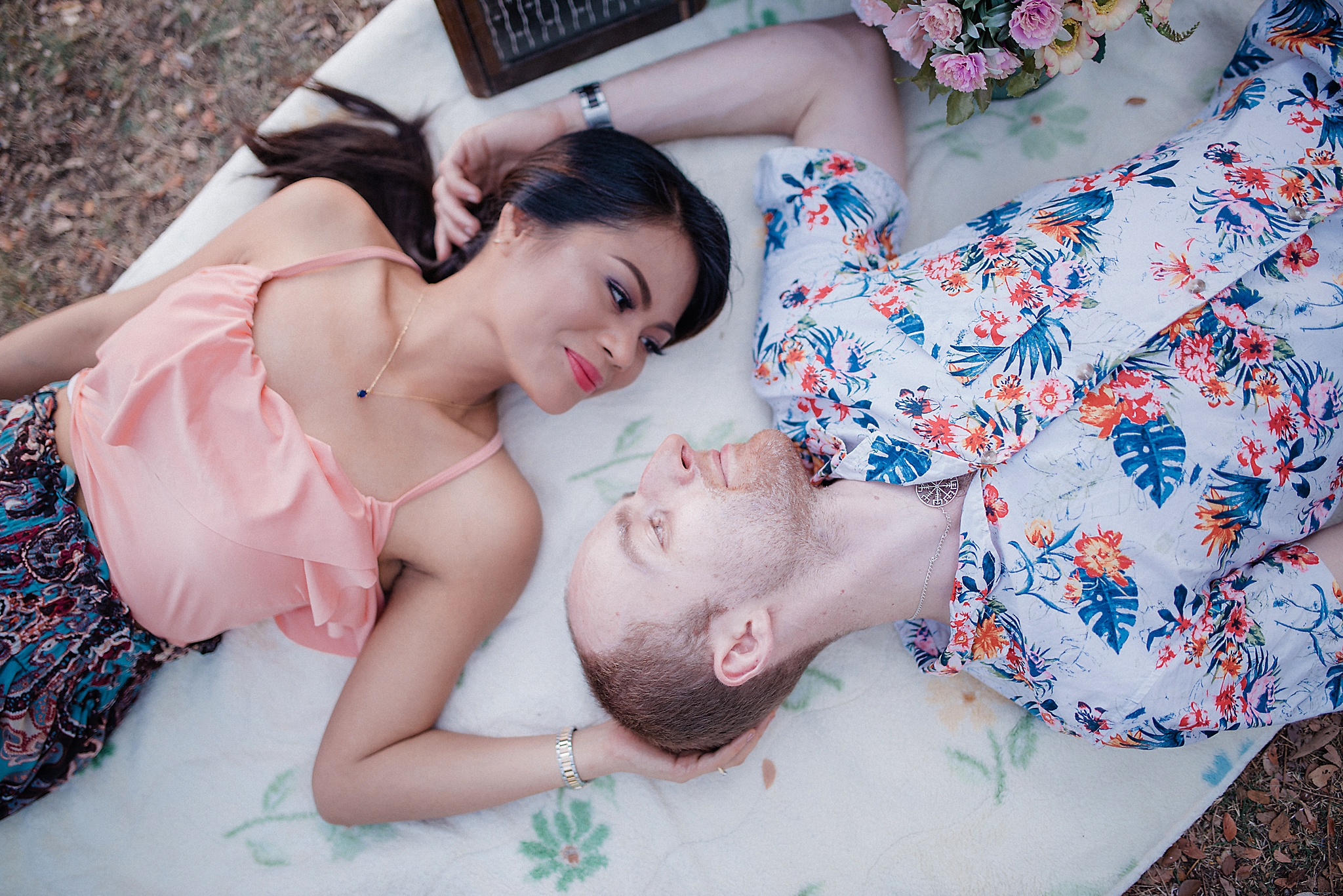 Oh actually, another idea that I had in mind was having a similar theme from Kristine & Oyo’s prenup shoot – the one specifically where Kristine was wearing a vintage outfit, and the location seemed to be by the beach/seaside. But darn, I can’t pull it off! hahaha!

I do not think Phil and I are really comfortable with the photoshoot – I felt like we were wearing the same expression all throughout (especially Phil)! :p We love photos, but we love to be behind the camera, not in front of it. But anyway, we survived the full day of this activity. The actual photoshoot was less than a day, but the amount of time we spent in the salon before we started off with the first location was just way too longgggg…. Perhaps I needed a heavy make up because I was just looking haggard with my lack of sleep! haha! Oh well. ♥