Spain’s the reason why I went to Paris three weeks before this trip—Schengen visa thing whatevs.. This is so far my longest out-of-town vacation—9 days to say! :) And I was kind of excited to visit this country; strange, but one of the reasons (and primarily?) would be the country’s language—which is close to my dialect, Chabacano!

Anyway, OUR (yes, I wasn’t alone during this trip! =p) first stop was Madrid—Spain’s capital and largest city!

The Buen Retiro Park (Spanish: Parque del Buen Retiro, literally “Park of the Pleasant Retreat,” or simply El Retiro) is one of the largest parks (and one of the premiere attractions) in the city of Madrid, Spain. The park belonged to the Spanish Monarchy until the late 19th century, when it became a public park. The park is filled with beautiful sculpture and monuments, galleries, a peaceful lake and host to a variety of events. –Wikipedia

Inside the Crystal Palace… No drama in here–this is just me when I’m tired and hungry! :D

The Palacio de Cristal (“Crystal Palace”) is a glass and metal structure located in Madrid’s Buen Retiro Park. It was built in 1887 to exhibit flora and fauna from the Philippines. The architect was Ricardo Velázquez Bosco. –Wikipedia

Outside of the Royal Palace… –superb interior! Unfortunately, we can’t take photos inside of the palace…

The Palacio Real de Madrid (literally: Royal Palace of Madrid) is the official residence of the Spanish Royal Family at the city of Madrid, but is only used for state ceremonies. King Juan Carlos and the Royal Family do not reside in the palace, choosing instead the more modest Palacio de la Zarzuela on the outskirts of Madrid. –Wikipedia

St. Jerome the Royal and The Rizal Monument

Undeniably, ’twas so tiring to see the tourist spots in Madrid by foot! :D And not to forget, it was SUPER summer during August, it felt like walking along the Manila streets—felt like home! haha! But what compensated all our exhaustion was the Spanish cuisine— Spain is such a pecfect place to satisfy one’s gastronomic cravings! And the flamenco dancers entertaining during dinner were a plus. :) 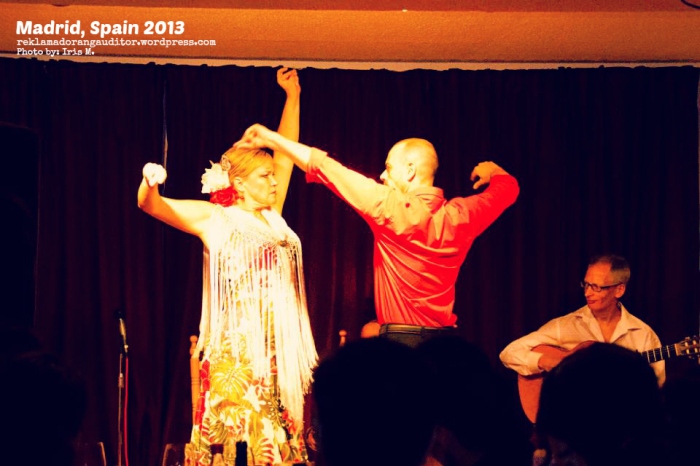 Madrid’s all that (I think), so when we ran out of places to see, we went to the province of Segovia on the 3rd day via train and bus… It’s a much cooler place than Madrid! :)

We met new Filipino friends (Ate Malou and Kuya Joseph) when we got down from the bus in Segovia; had lunch with them, did the tour around the narrow streets of Segovia and climbed the castle with them, and uhmm shared random stories (over coffee and some pastries) with them… And by random I mean sharing our POVs on love, facebook, travels and blah blah…

The Aqueduct of Segovia (or more precisely, the aqueduct bridge) is a Roman aqueduct and one of the most significant and best-preserved ancient monuments left on the Iberian Peninsula.

The Alcázar of Segovia (literally, Segovia Castle) is a stone fortification, located in the old city of Segovia, Spain. Rising out on a rocky crag above the confluence of the rivers Eresma and Clamores near the Guadarrama mountains, it is one of the most distinctive castle-palaces in Spain by virtue of its shape – like the bow of a ship. –Wikipedia

Our view of Segovia while on top of the Alcazar. Superb!

The trip to Madrid and Segovia, although exhausting, was fun! And it’s always a nice feeling to meet new people while traveling—it widens my understanding of how life is while on the road! :)

PS: We initially planned to go to a gay bar when we’re back in Madrid after Segovia, but we let go of the chance haha! ‘cause we were too exhausted and we needed sleep for an early trip to another city—Valencia! (on my next post!)