As always, here’s a quick post to summarise how my year 2018 went. On a personal level, it’s been very good—as earlier posted, Phil and I got engaged in February this year. That’s probably my favourite highlight for 2018.  I also got my permanent residence, which I am happy about and made me realise how time quickly went by: 5 years in the UK! Who would have thought I’d survive?! :p

Wedding planning is currently underway, and starting to get a little bit stressful. Just a little bit. We mainly wanted everything sorted by end of December so we won’t have to worry much in the new year – I personally would really want to not worry about anything related to the wedding in January and February, as this is busy season for me at work. Anyway, I think we are pretty much sorted, at least for the major part of the wedding.

Enough of the intro as I’d probably say the same things as what I will be listing down below. So for the highlights, here they are (in chronological order):

1.  Finally getting my ILR (UK permanent residence permit)! So here’s one of the many photos I took from 5 years back during my first time in London. Time went by so quickly; who would have thought I’d survive?! 🤗 I didn’t think so either. Sometimes it’s scary to think about how long I have been here and feeling like I’ve not accomplished much. Maybe I am overthinking. Wait, I’m supposed to post about a 2018 highlight/countdown to new year hahaha! But yes, that ILR means I am sort of free, hence a highlight. 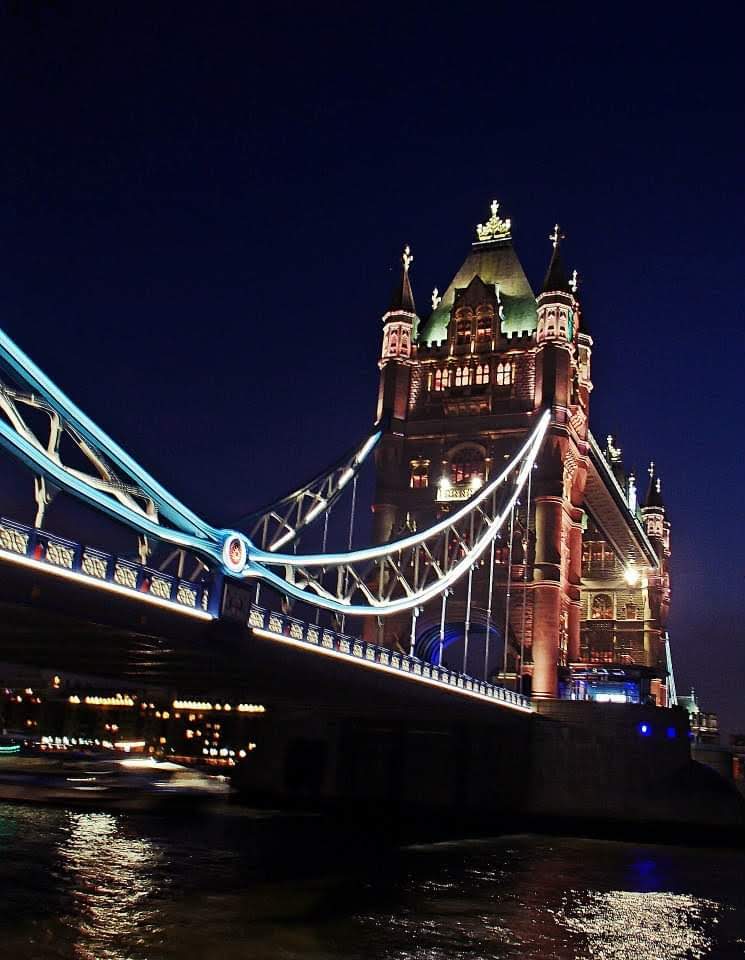 2.  Getting engaged! Another milestone, my most favourite from this year, I would say. It happened during a surprise trip to Munich, which Phil told me was a gift for finally getting my ILR. I was 1/4 expecting that a proposal might happen during the trip (just being honest hahaha!), but of course 3/4 of me was not too convinced because I thought it was too cliché hahahaha! But anyway, it happened while we were in Neuschwanstein Castle and it was one of the best days (despite it being so misty and cold)! 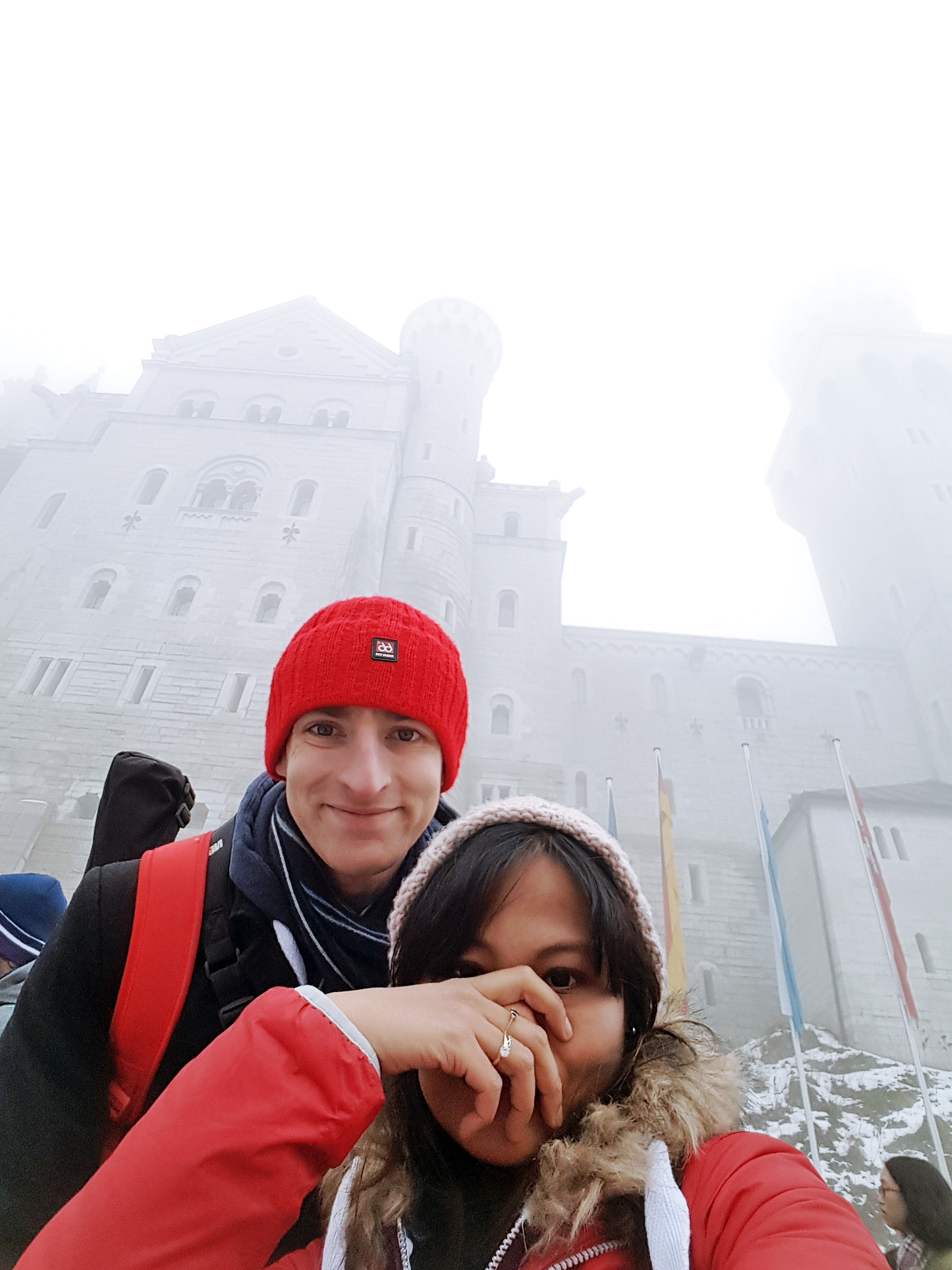 3.  My 4th time in Paris – this time with Phil and mainly for the half marathon. This was his best half-marathon so far, finishing in 1:24:41. It rained and was gloomy most of the time, but I probably cared less as I’ve seen most of Paris already. What I’m (always) thankful about at every race he does though is seeing Phil unharmed at the finish line. 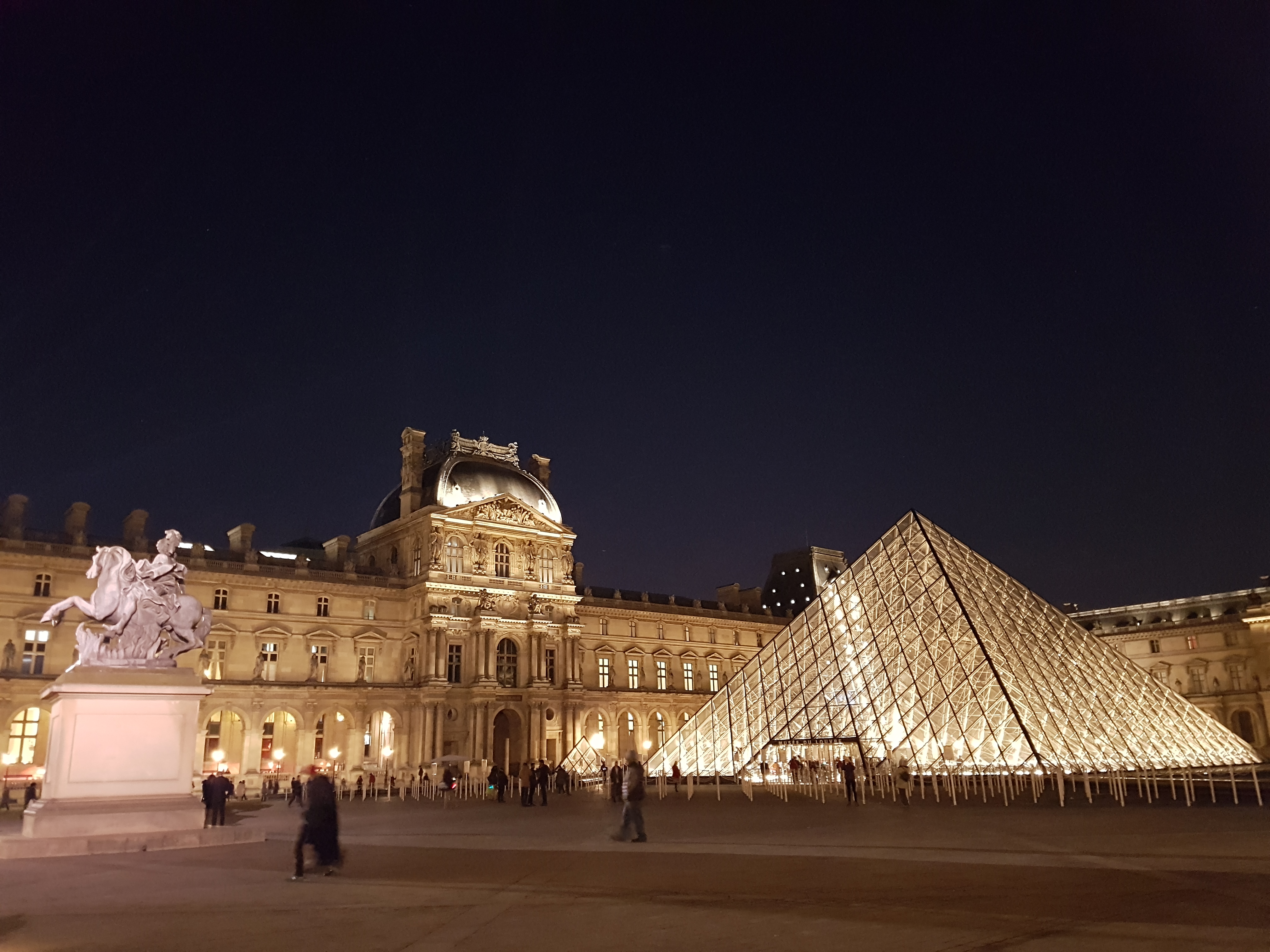 4.  Going home and revisiting Santa Cruz Island with Phil and my family. We were also in time for my eldest niece’s (@Althea) 18th birthday—and our homecoming was a surprise to her. :) 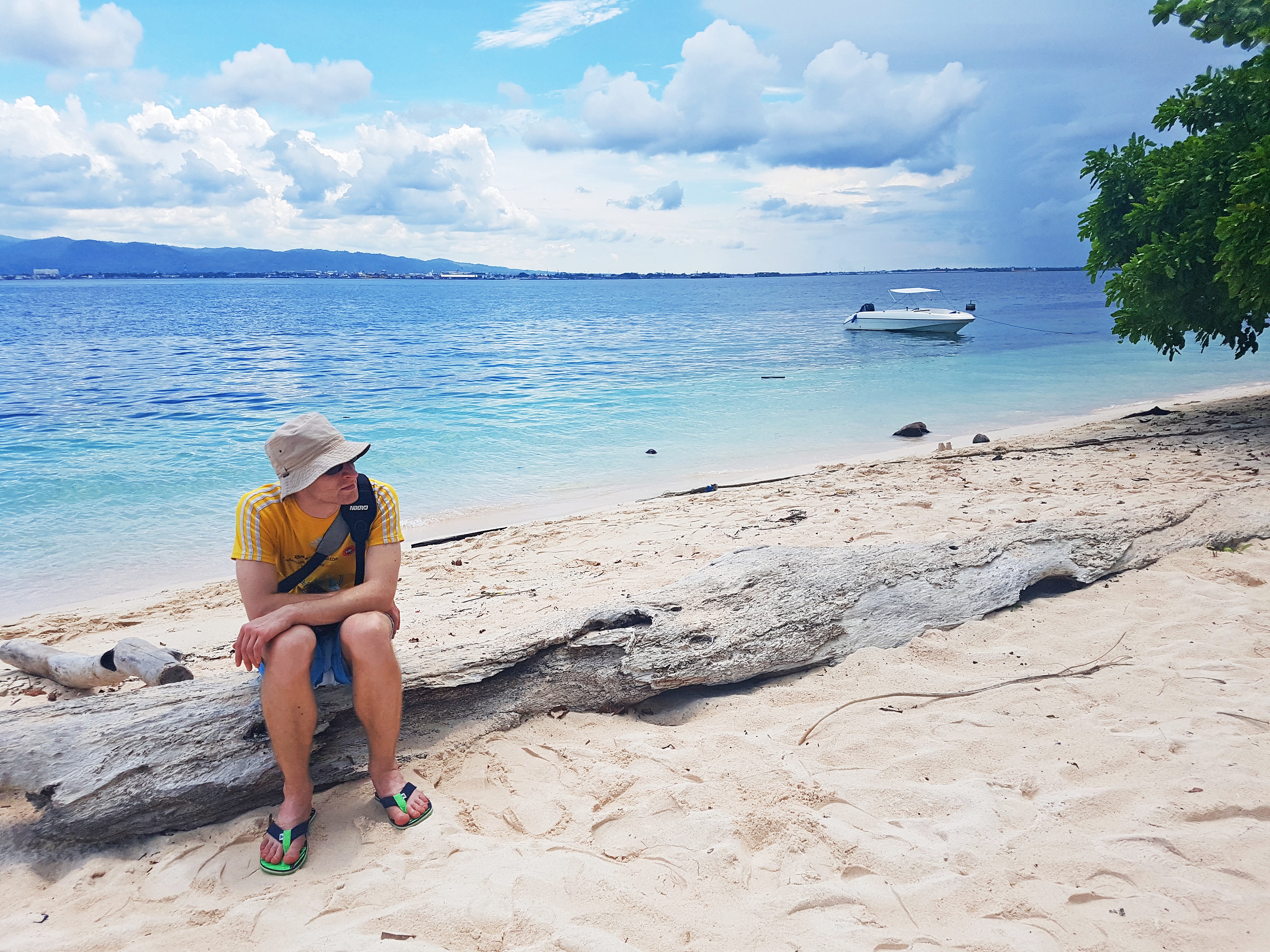 5.  Adventure in Northern Thailand. Touring around, seeing temples in ChiangMai and ChiangRai, and playing with Elephants in between. And yes, with a 30-minute visit to Laos via MekongRiver. 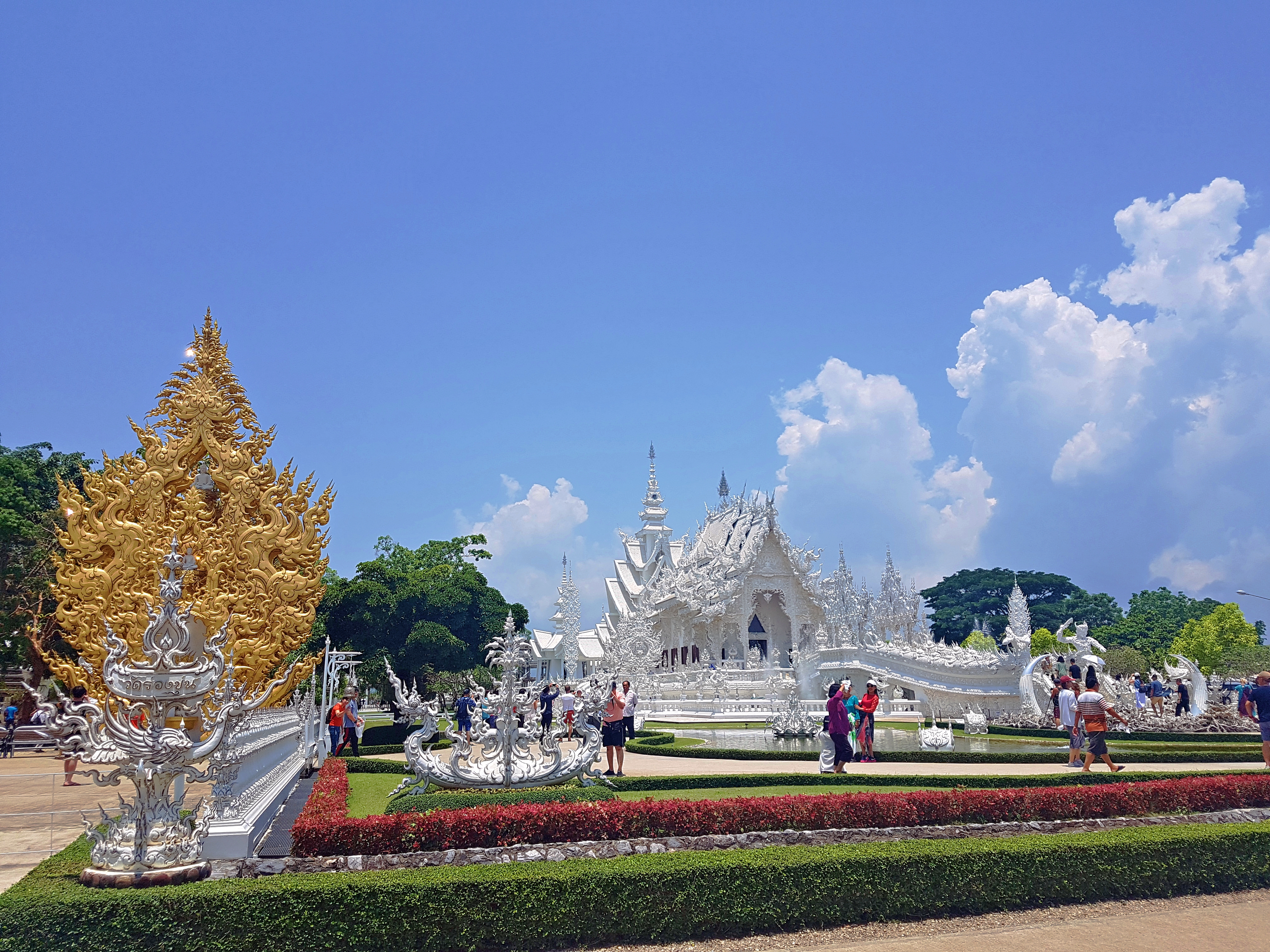 6.  Temple run in Myanmar! Spent almost 3 days in the Bagan Archaeological Zone, exploring centuries old temples under the scorching heat of the sun. The incredible architecture was worth enduring the 40+°C temperature! 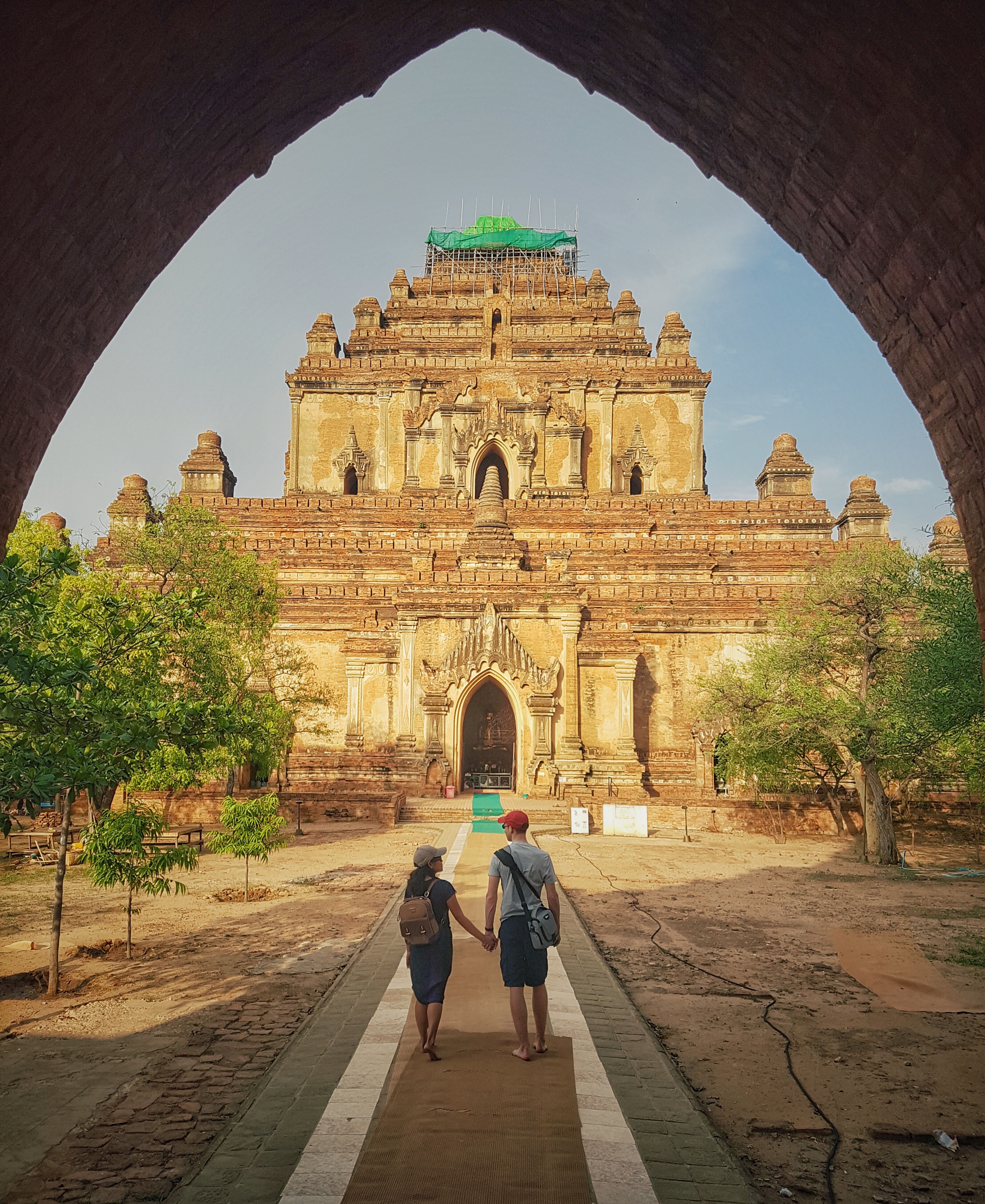 7.  Yangon for a day. Explored the city of Yangon and caught up with friends. This was a quick layover before we flew back to Bangkok for yet another day of layover. But there was just enough time to visit the Shwedagon Pagoda, one of the most famous pagodas in the world! 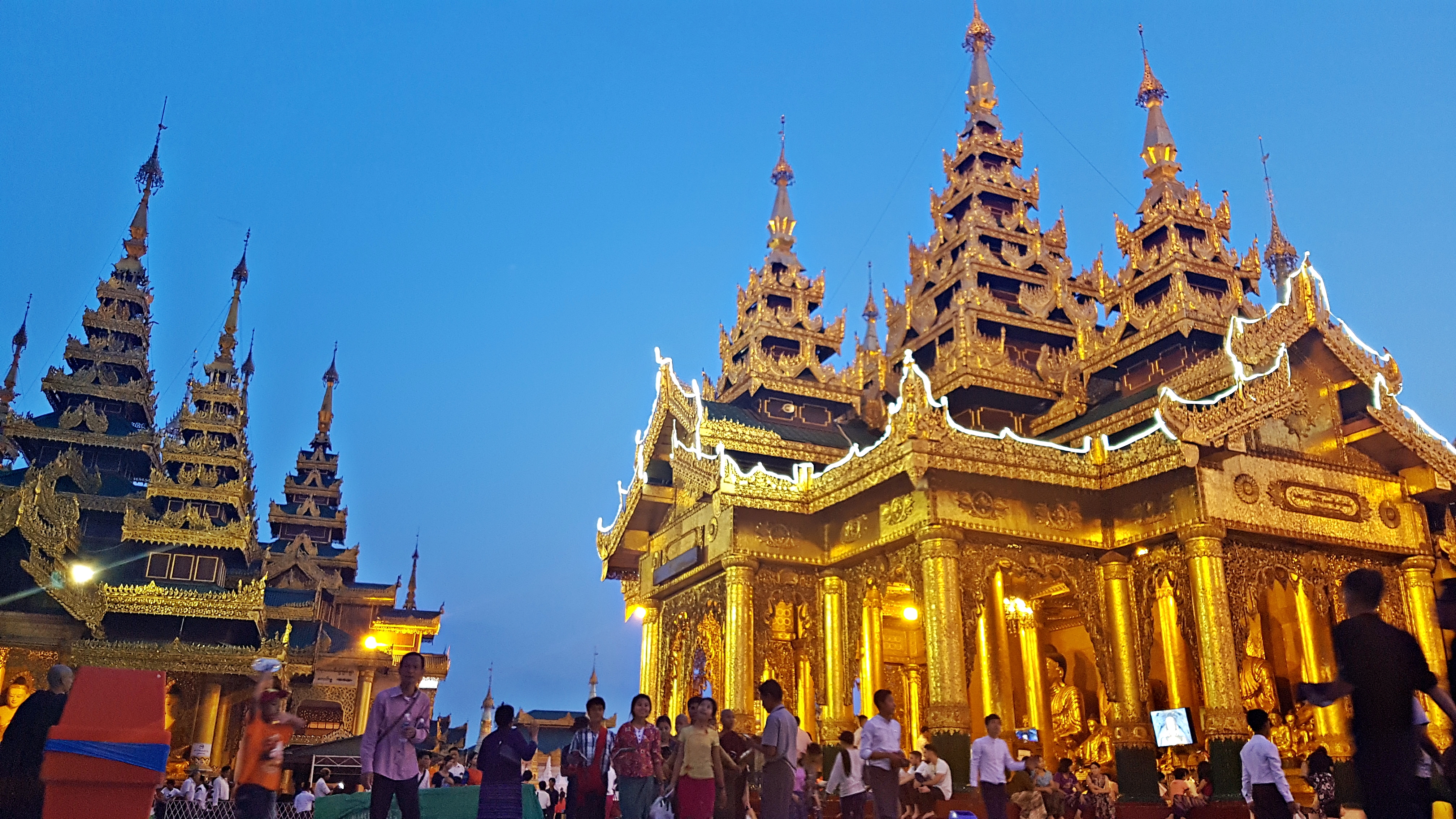 8.  24 hours in Bangkok, the last stop before heading back to Manila and moving on to our B-I-G Adventure. Phil and I were already ill by this time – down with fever and headache, which might have been from exhaustion and very hot weather. But we didn’t let this stop us from exploring Bangkok. :D But if travel destinations were my lovers, Bangkok is and always will be just a fling. This was not my first time in Bangkok – that was also just an overnight stop. 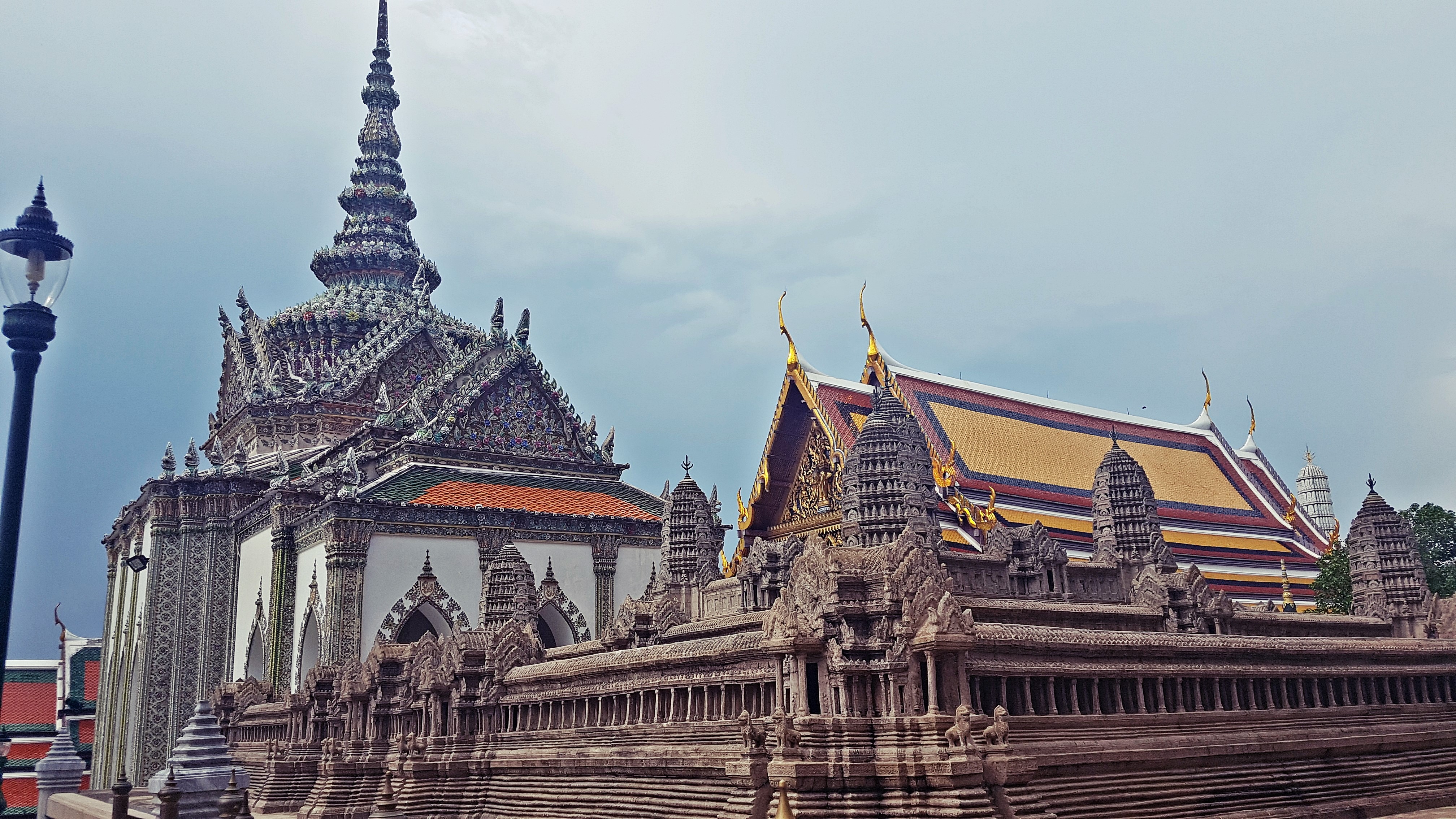 9.  B-I-G adventure: Bacolod—Mainly for Sam and Joh’s wedding. So not me, but I actually did not have a lot of photos during the wedding, especially during the reception. :D Just enjoyed the moment! So this photo was taken the next day on a day tour around Bacolod & Negros Occidental, when most of us were still hungover. 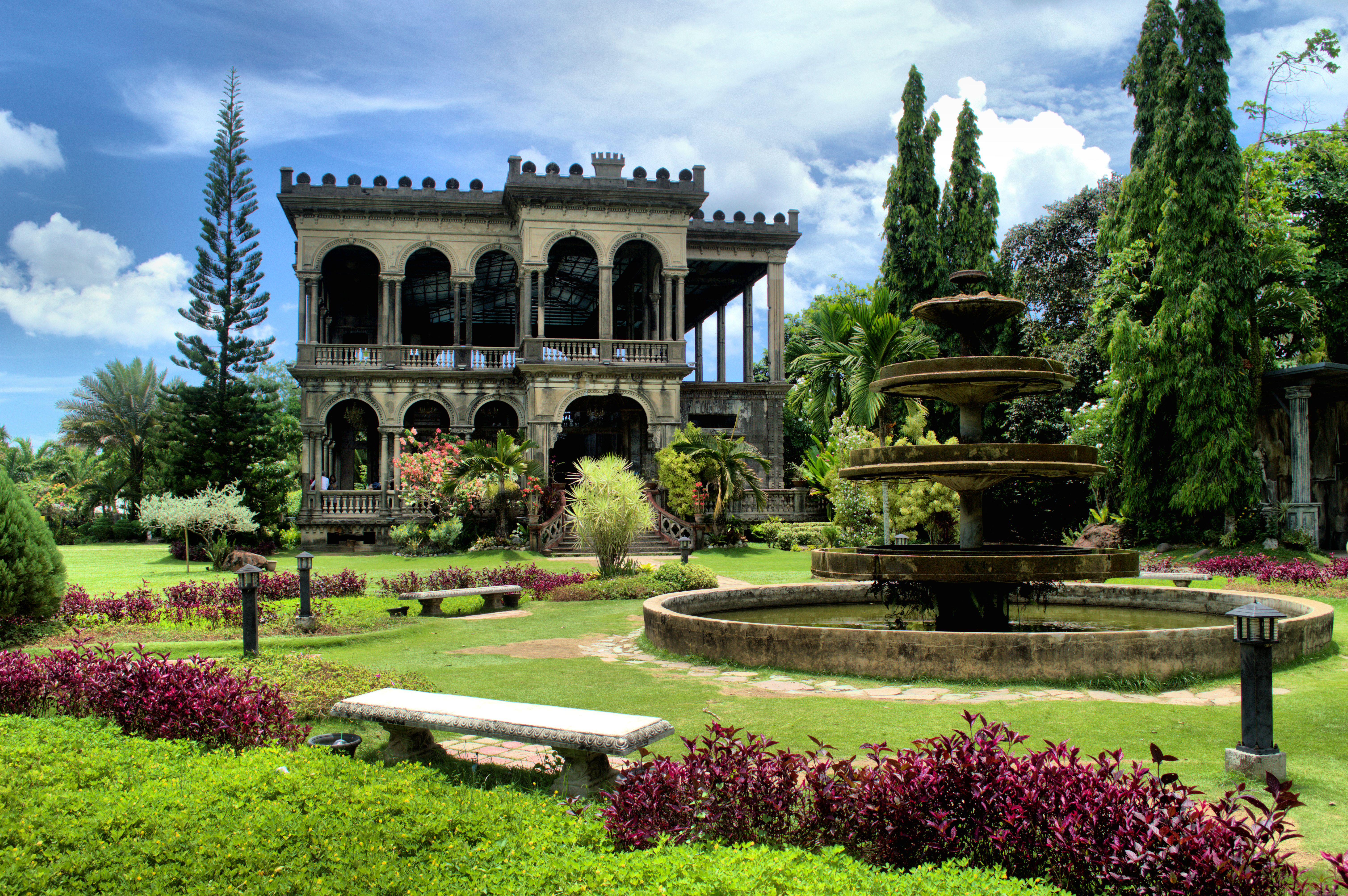 10.  B-I-G adventure: Ilo-ilo—Mainly for Isla de Gigantes, which is located in the north of Iloilo. It was a bit of a challenge to get to from Iloilo city, dragging our luggage and intensifying my haggling skills (because Phil seemed to be wearing a ‘charge-me-triple sign’ on his forehead), to the point when the van driver wanted to already give up on us and make us take the tricycle instead on a very bumpy road 😀. But worth the battle I suppose. 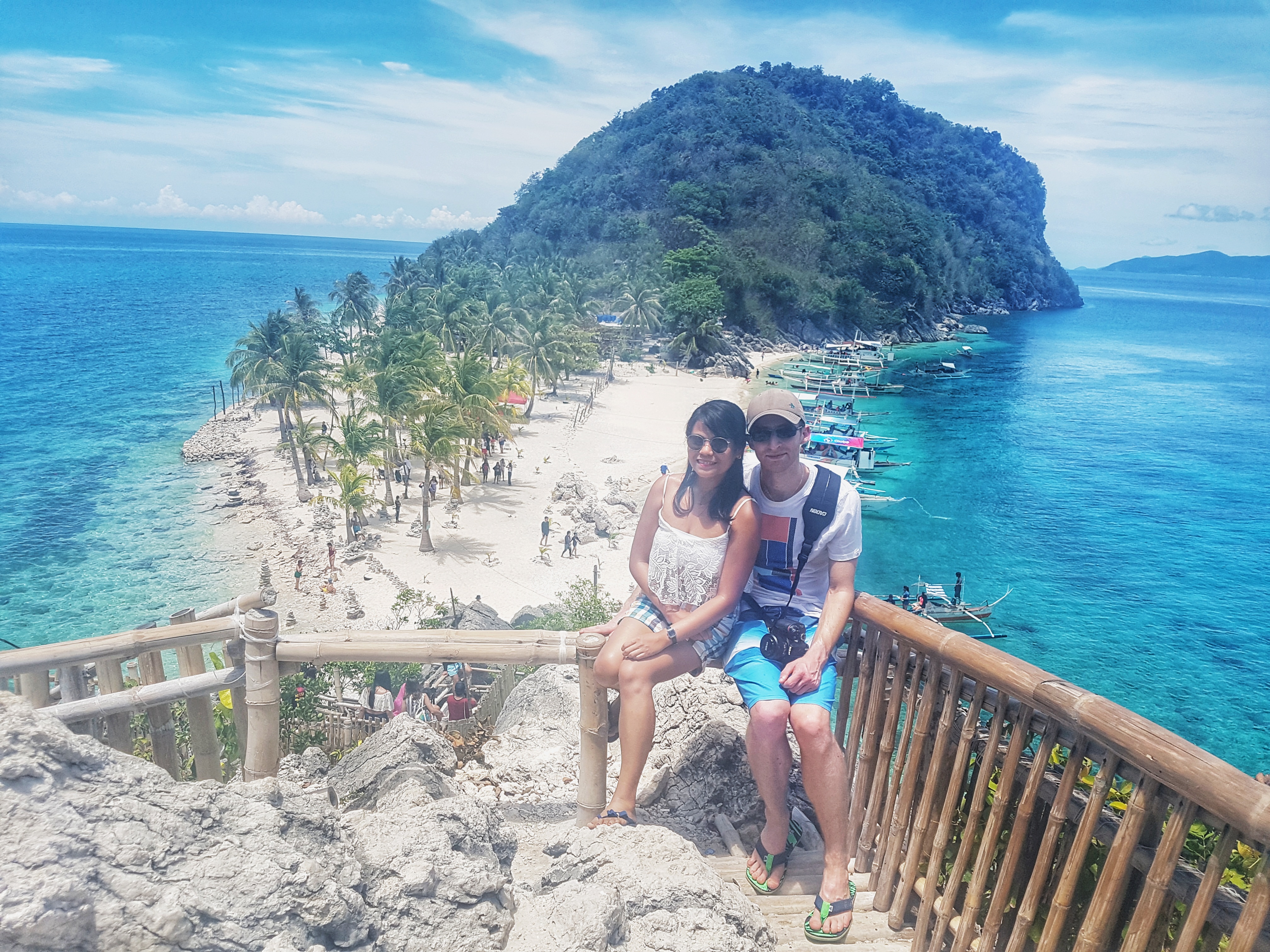 💡Tip: If you’re getting here via plane, take the flight bound for Roxas City (rather than Iloilo City) as it is closer to Carles.

11.  B-I-G adventure: Guimaras—for the Mango Festival! This was a side trip whilst we were in Ilo-ilo City. Took a ferry, jeepney, tricycle (not necessarily in that order) just to eat the best mangoes in the Philippines! Yums!!! 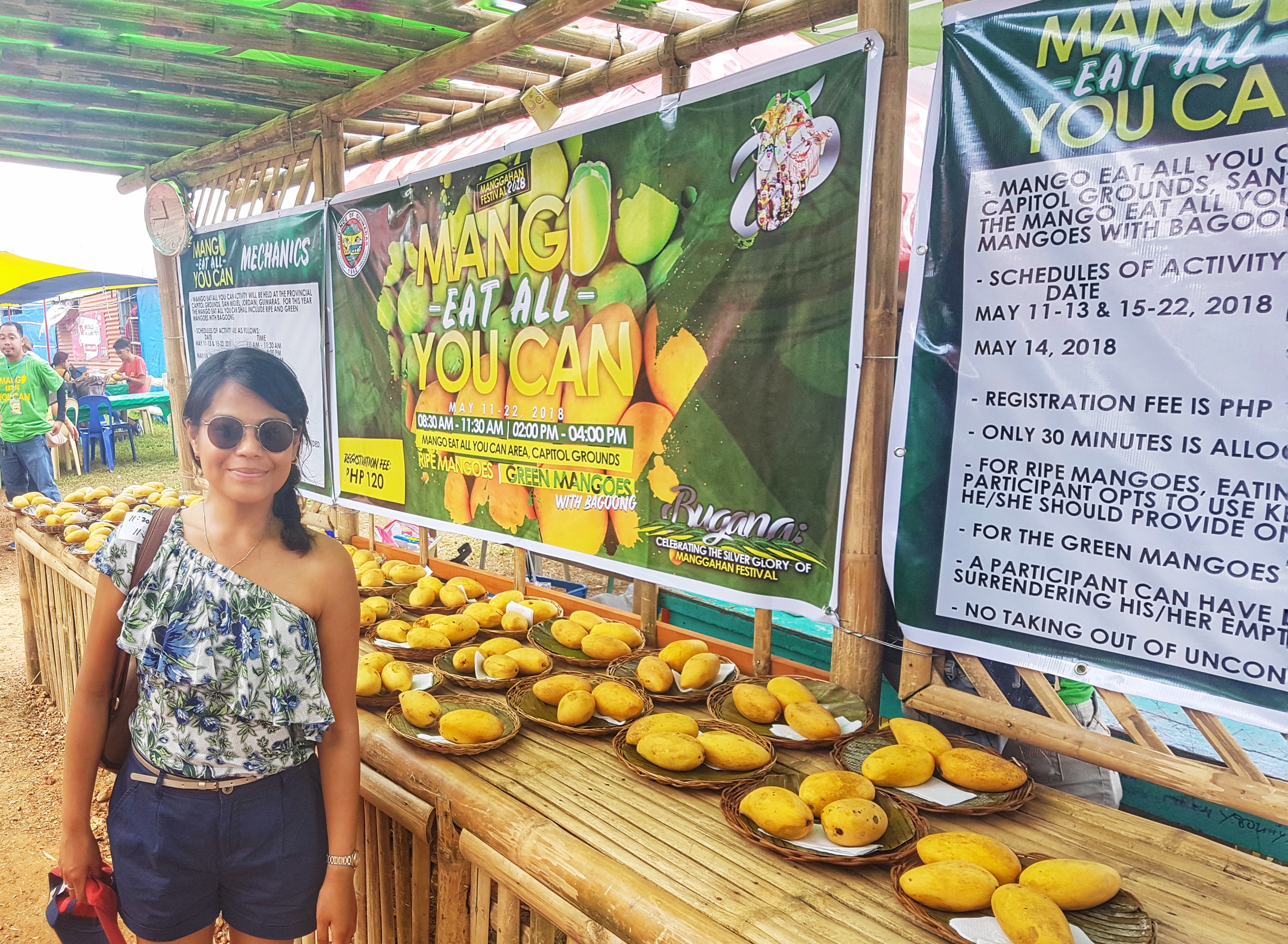 12.  My mother’s 70th, so two trips home this year. It was a surprise homecoming for my mother, meeting my entire family at Davao Airport (Davao City was my mother’s choice of travel destination this year). I can’t take just her on a trip alone, everyone else has to tag along! It was fun exploring with my entire family and Phil. 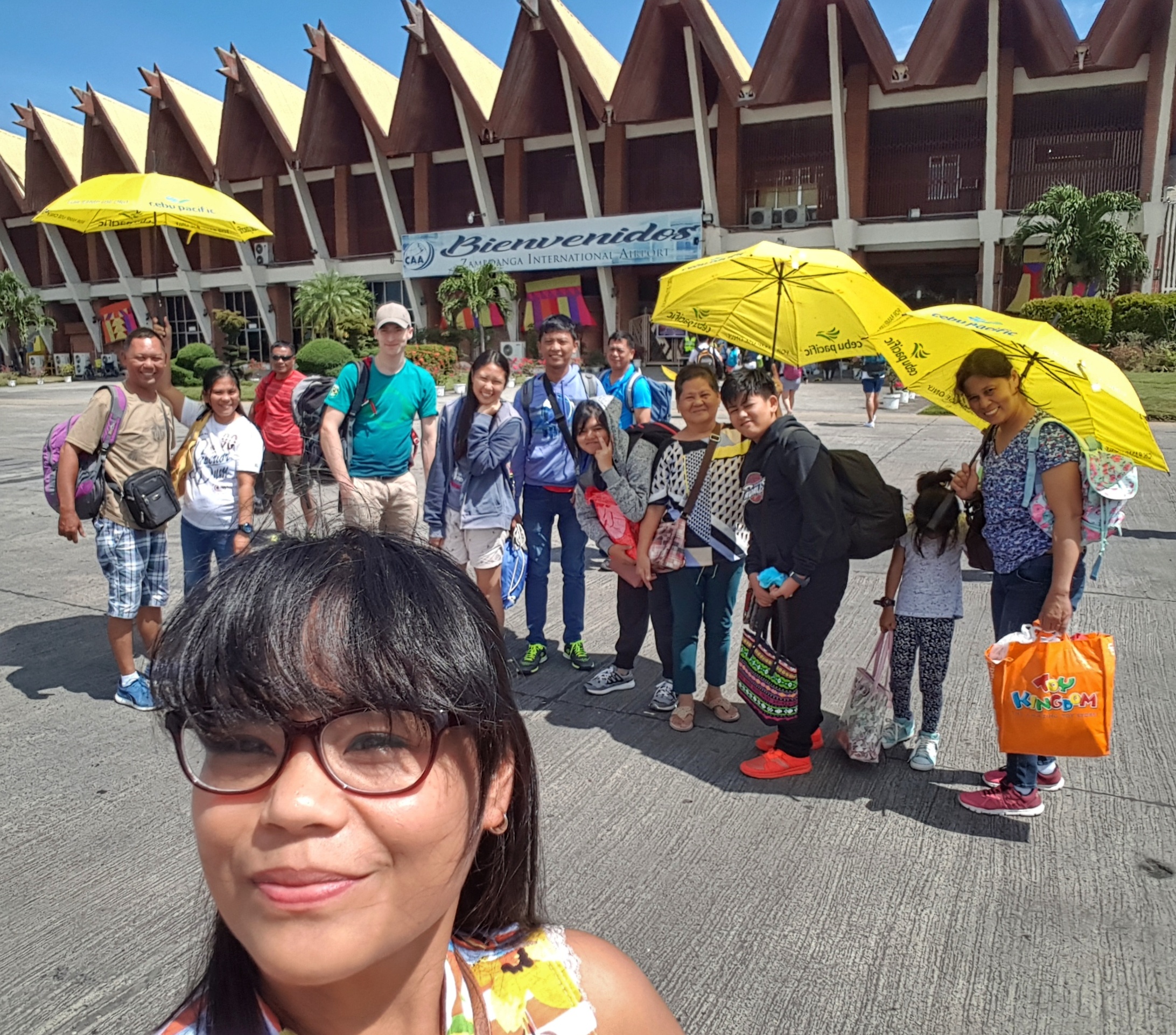 PS: This photo was taken when we arrived in my hometown Zamboanga City, after our 3-day trip in Davao City.

13.  My 3rd time in Kuala Lumpur, Malaysia. The KL trip with Phil supposed to have happened in our 2015 homecoming, but due to flight delays, we did not end up spending time in KL then. This year, on our 2nd homecoming, we decided to do a side trip before going back to the UK and spent 2 days exploring the city. 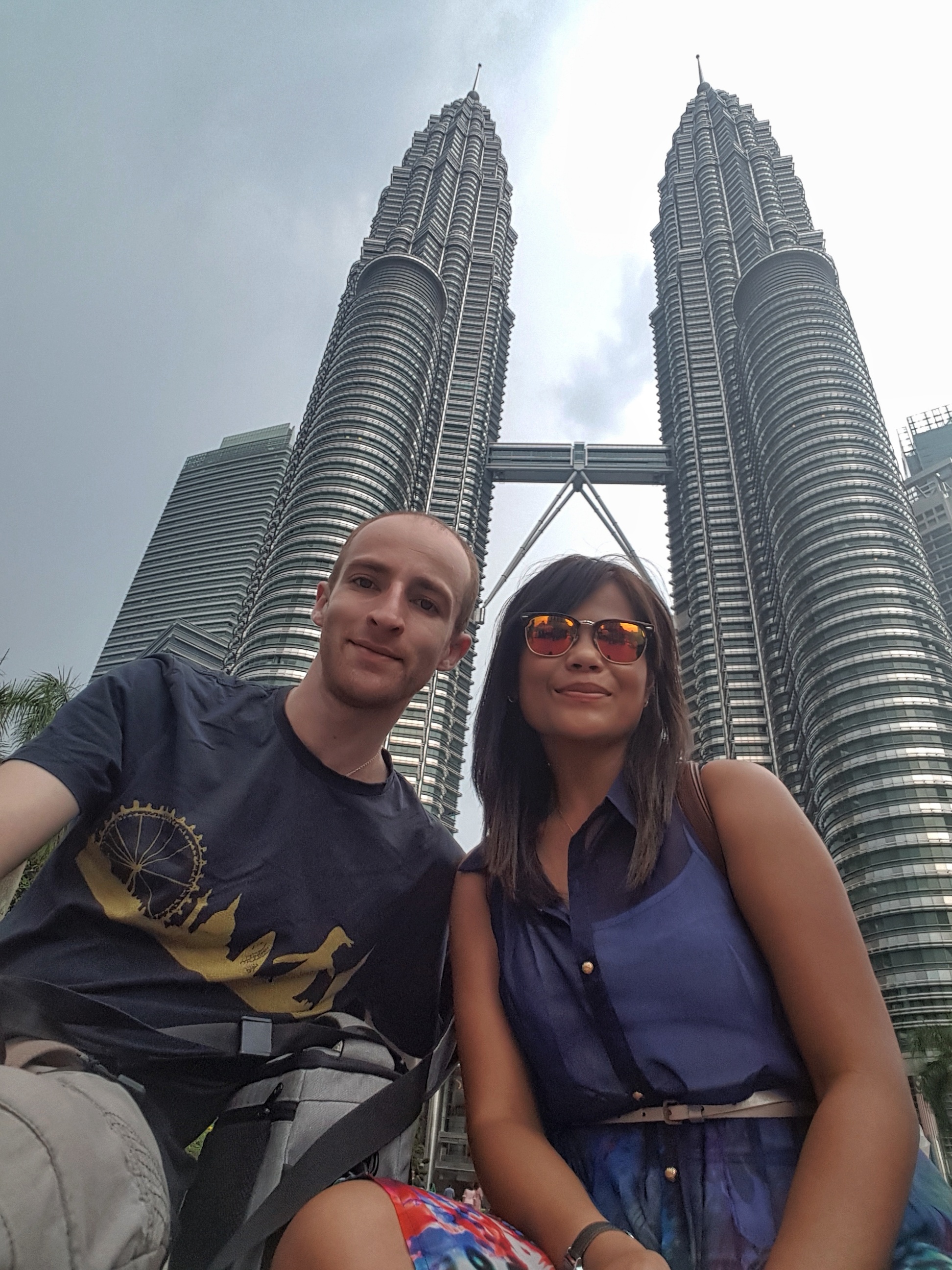 14.  Aimee and Florian’s Bavarian wedding, and being one of their witnesses. :) It was an interesting bi-lingual ceremony, and where I got to wear a dirndl. But more than that, it’s one of those moments where I realised that adulting is real! I know I will be in the same situation pretty soon. But seeing my high school best buddy, who I used to run around with in Zamboanga City chasing jeepneys (and stalking random targets in town), get married made me realise that we have finally reached our marrying age – maybe a little bit later than most of our classmates, but heck! 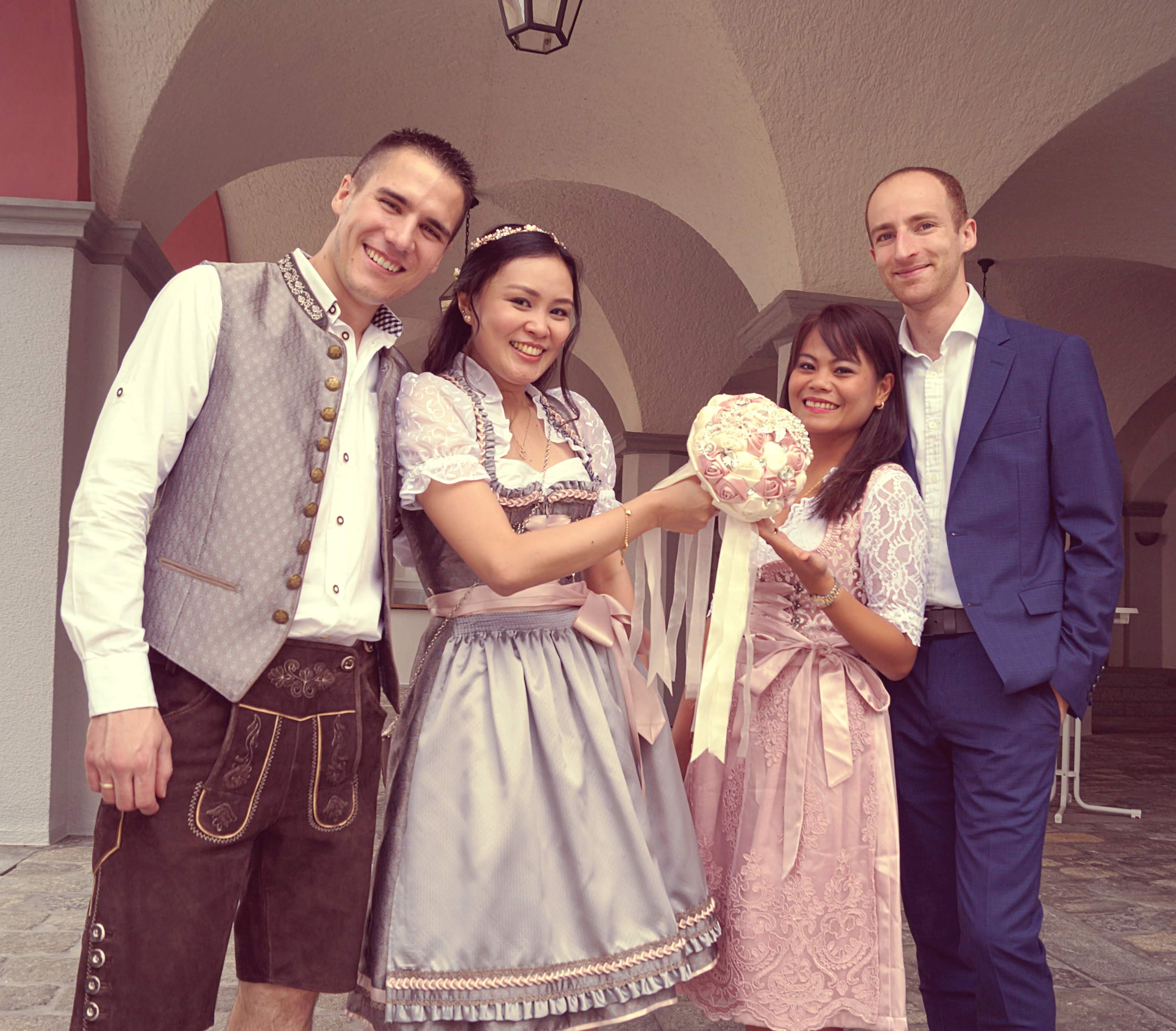 15.  Oktoberfest in Munich—the most famous beer festival in the world! After the Bavarian wedding, we headed to Munich to meet with Sam and Joh, and get drunk! (Because we didn’t get the chance to drink during the wedding. 🤪). 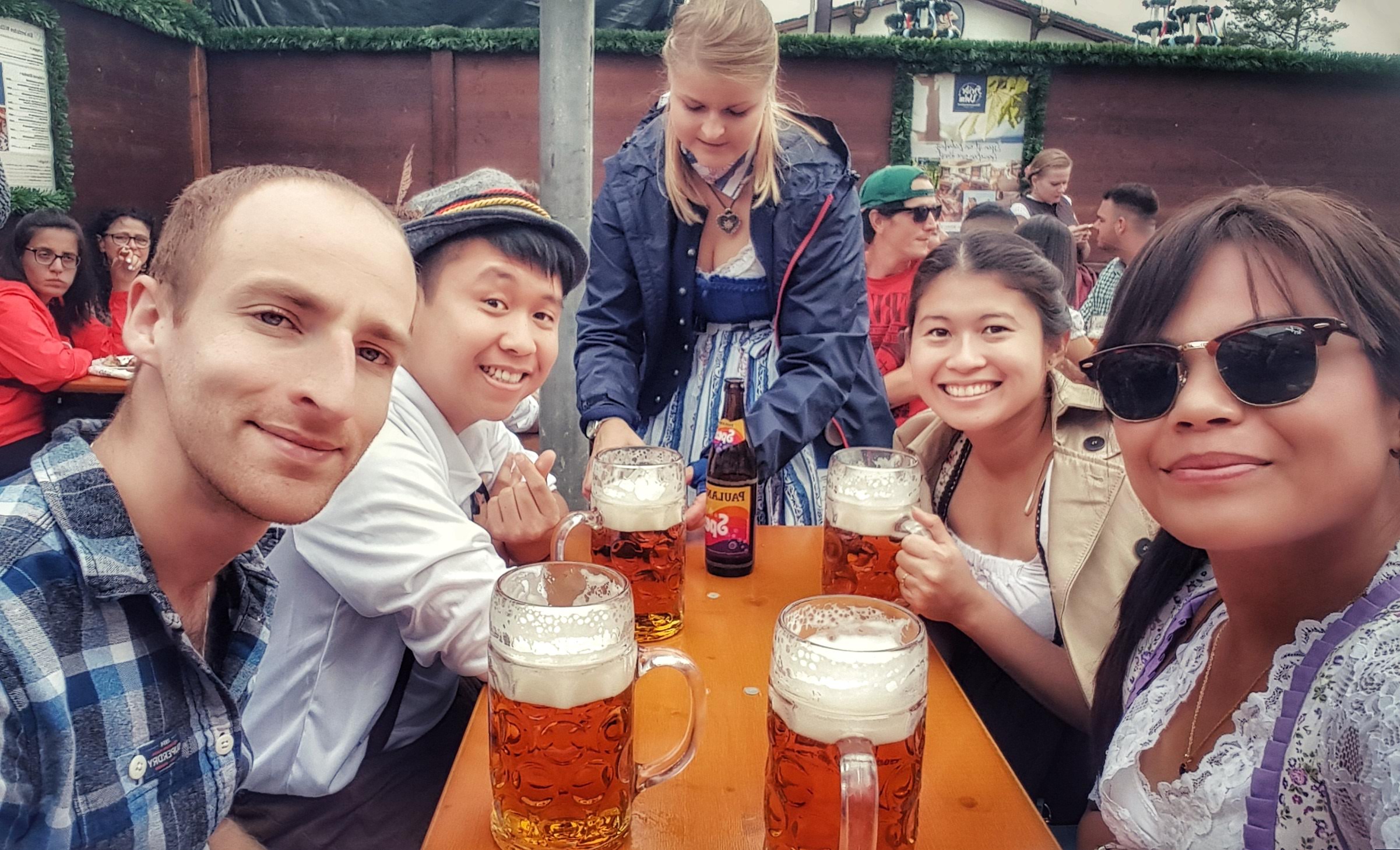 16.  500-mile road trip in Germany-Liechtenstein-Switzerland. The longest we’ve ever been on a road trip, with the Bavarian Wedding and Oktoberfest hangover in between. One photo is not enough to showcase the beauty of the places we stopped during our trip. Umm well, I have posted several photos back then, so this will do for the highlight! :p Here’s to more of this! (Maybe this will motivate me to learn how to drive? Maybe…)

17.  Weekend fillers: Trips to National Trust sites, making the most of our membership. It’s our 3rd year as members and there are still loads of sites that we haven’t been to. Looking forward to more of these trips in the coming year! 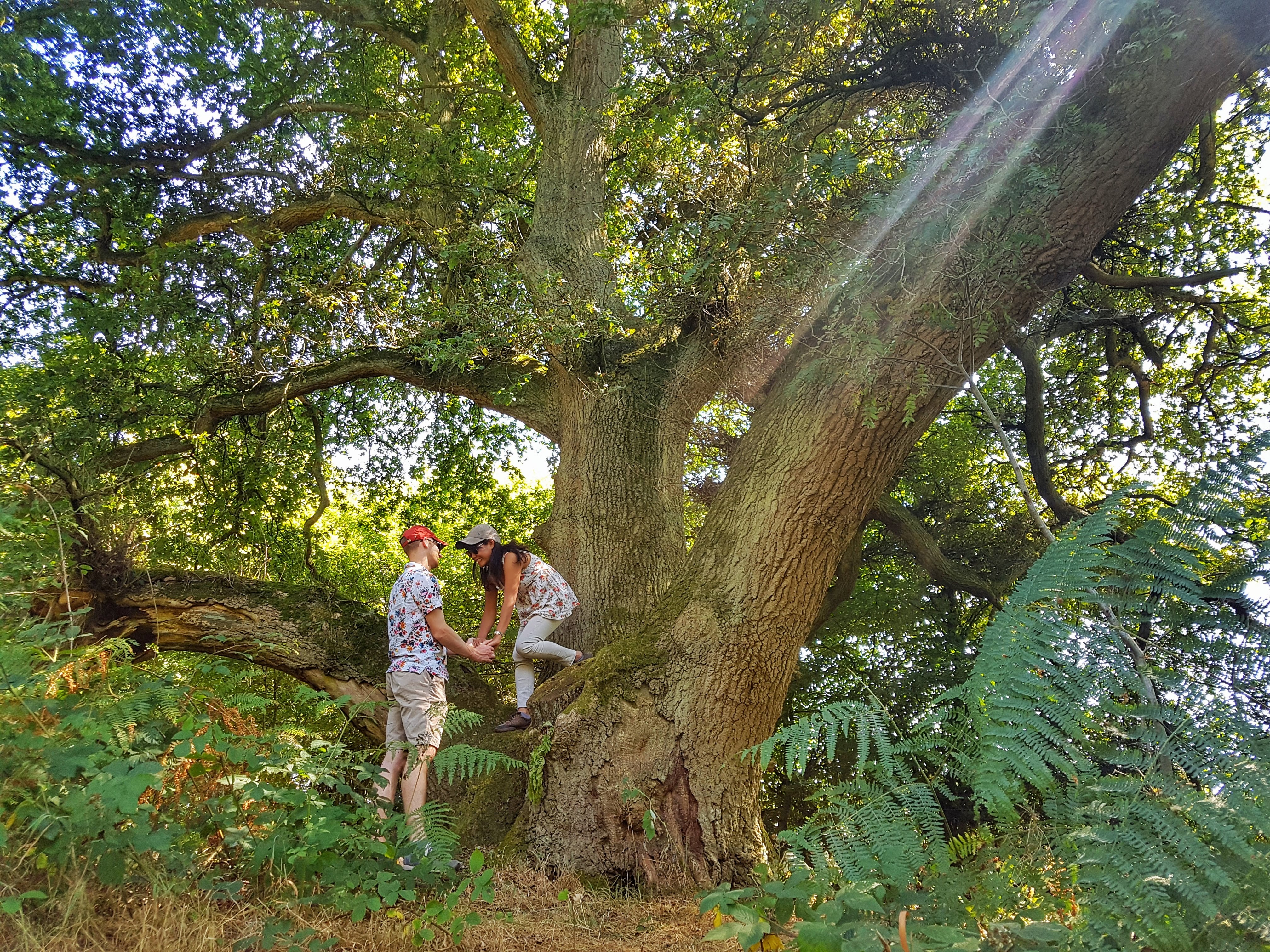 18.  Random weekends (and sometimes weeknights) with Team Clingy. This year, we spent so many weekends, planned or unplanned, mainly to eat, drink and play. We started 2018 playing Mario Kart on Switch, now here we are ending the year with another gaming sesh playing Smash Bros., Aces, Mario Kart, and Mario Party. I am not a gamer, but knowing I am not alone, doesn’t make me feel too bad. :p 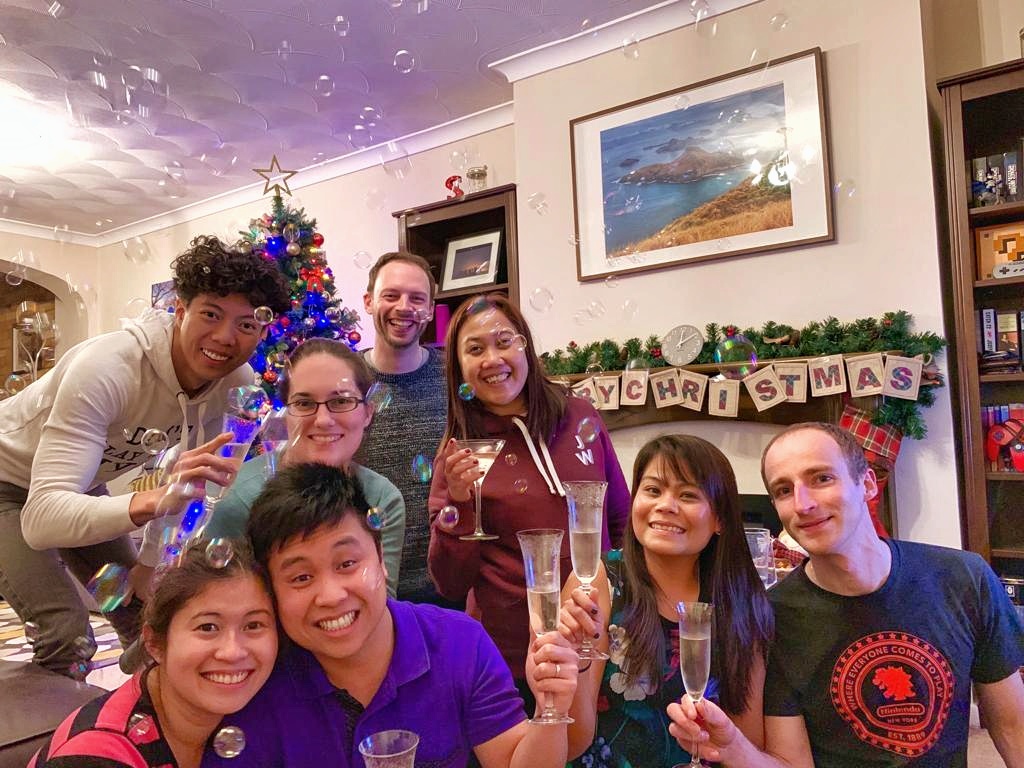 But more than the 18 highlights of 2018, I am most grateful for the people around me that made the year more bearable.

i) The family that I gained here in the UK, who always check on me and Phil, making sure we are both doing fine. Thanks for accepting me as part of the family… wait this feels like giving a wedding speech hahahahahahaha! But yeah, thank you for giving me the “at home” feeling. 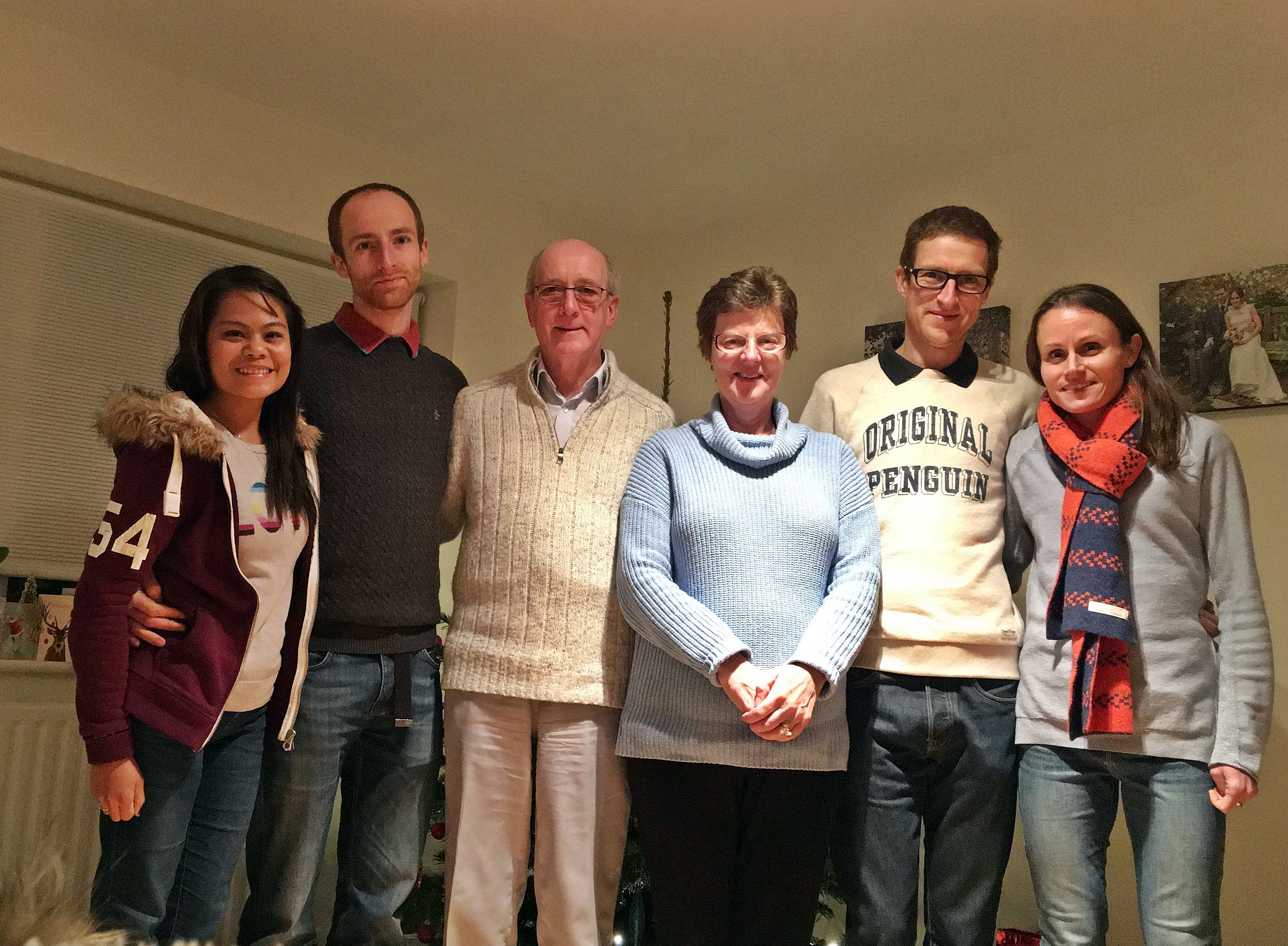 ii) My family back in the Philippines for always having each other’s back—who stick together in good and in not-so-good times. I had a bit of a panic attack when just recently (like a few days before Christmas) my mother was rushed to the hospital due to the verrryyyy low blood sugar level—the effect of going on a low sugar diet to treat her blurred vision, as prescribed by the &@!?”&^$! Optometrist! But knowing everyone’s there to look after our mother made me less worried. She’s ok now, by the way. Stay solid guys! (And find another Optometrist, if not done already). ;) 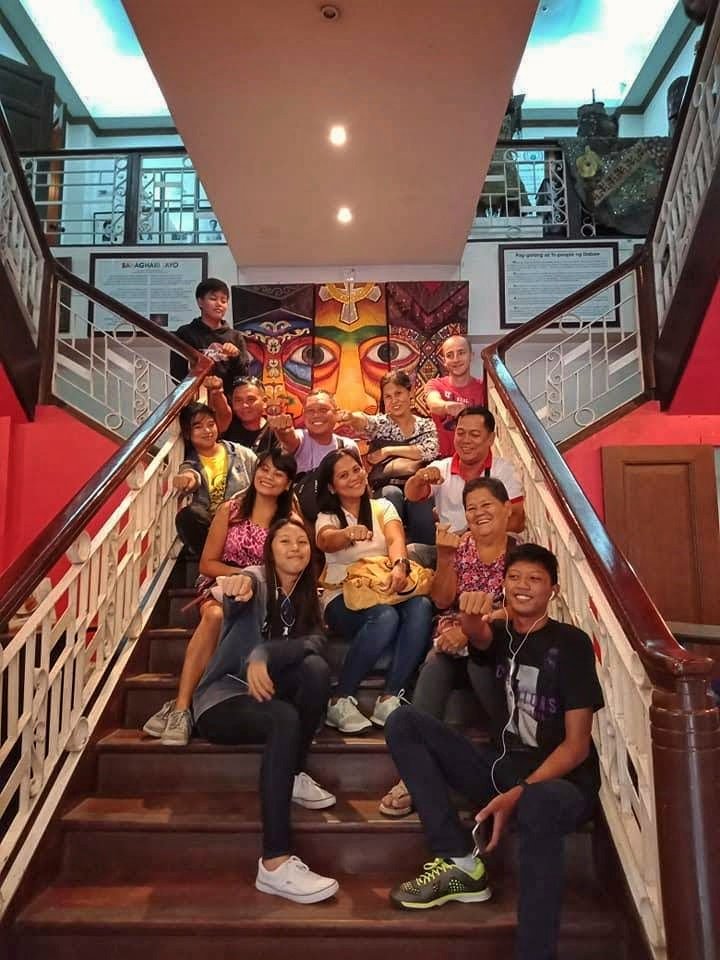 iii) And of course, grateful for this wonderful person who makes everything better (ahm sometimes worse? joke!) –the positive energy to all my negativity, the calm to my inner (and outer) storms, the Pepper to my Salt? What? The P to my S. Ha! Anyway, looking forward to more adventures, milestones and highlights this year and the years ahead with this one! But first, coffee? :D 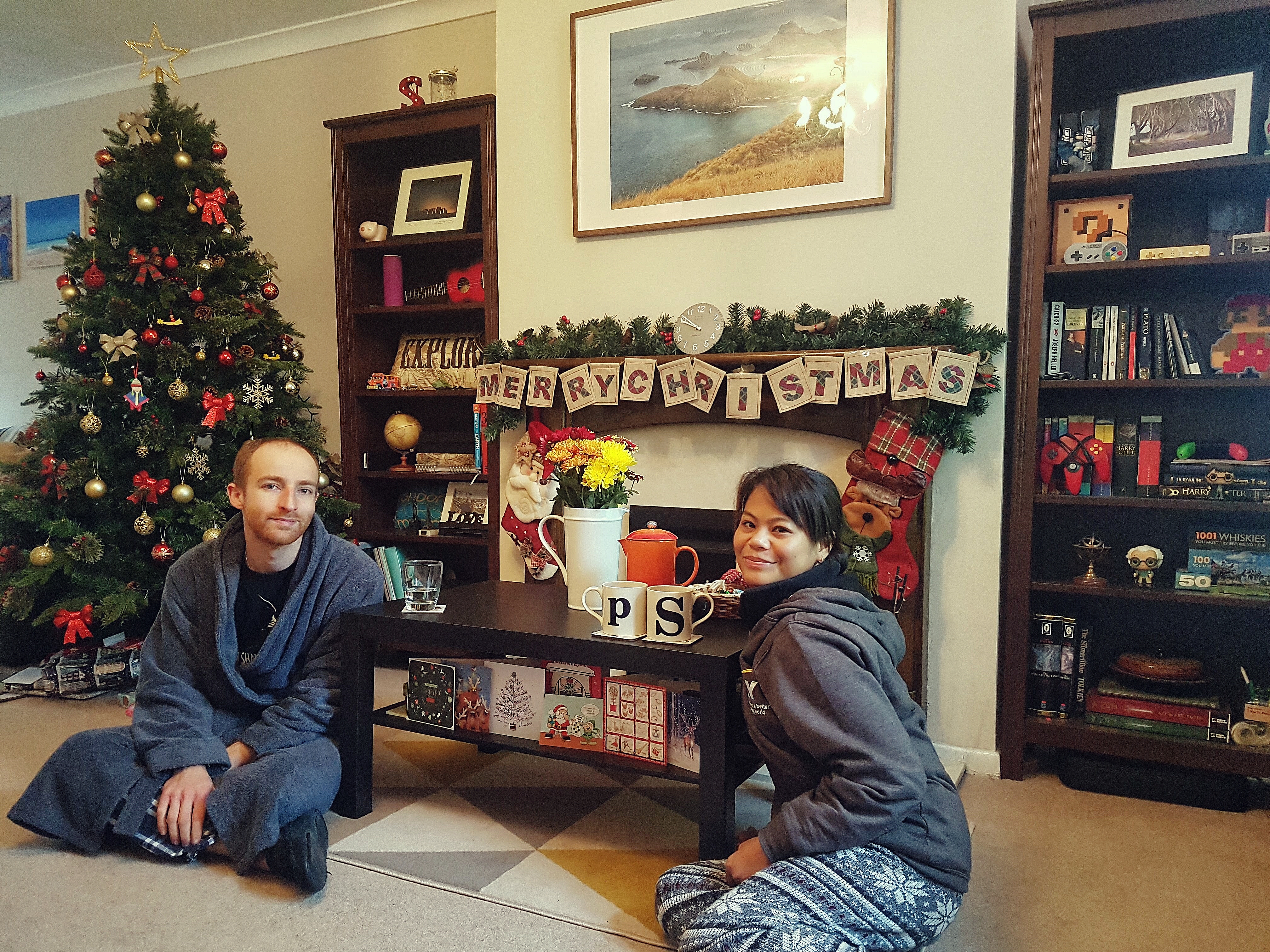 2018 indeed brought so many good things to me. I am not saying there weren’t any bad things — there were! And trust me, they caused so much hassle and stress over the year. But then, I’d say, I’m focusing on the positive stuff, so I bring in good vibes into the new year.  I am not ready for 2019 at this moment of writing, if I’m honest; I have internal struggles and fears. But I am trying to look at the bright side of things – like one, I am getting married to Phil this year, and that’s reason enough to look forward to the coming days. :) I hope you find that one good reason too, enough to get you motivated today and going forward.

For now and as always, I hope everyone had a good year 2018. And I hope we welcome and embrace the new year 2019 with grateful and hopeful hearts. Happy new year!! ♥