Click here for the complete itinerary of our 4D3N CdO-Bukidnon-Camiguin Trip last August 2012! :)
Warning: This is another photo-heavy post! Kunyari wala ako mashadong masabi; the photos will tell it all! :D

Our itinerary for Day 2 in Camiguin included island-hopping and visiting a waterfall, and I thought it would be the most hassling experience in my swimming life (may swimming life tlaga ako oh?! Hahaha!) ever! Imagine waking up so early to prepare for the island-hopping, and getting a first reaction of “Sh*t meron na’ko!”… Tsk tsk! (First time ko kase mag-swimming na may period, at first day pa! hahaha! wala lang sa timing kaya naha-hassle-lan ako!). Pero kineri pa din! :D

7am and we’re ready to hop into our banca bound for White Island. After having paid for our snorkeling gear at Pabualan Cottage, we walked for a few meters and we saw the beach nearby where our banca was waiting for us.

An hour or so at White Island

After 15 minutes of boat ride, we were welcomed by this breathtaking sight! I was amazed at how this island boasts its charm, that all I could blurt out was “Sh*t ang ganda!!” (kelangan talaga may mura? hehe!) It’s just so amazing!! …simple joys again! :D 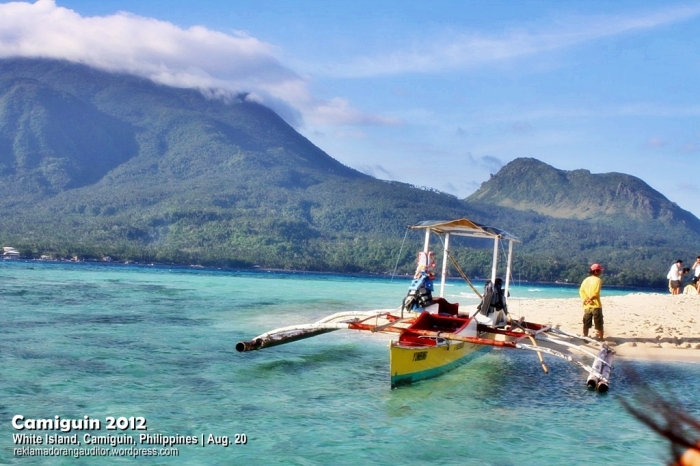 Notice how lovely the bancas looked like while these were docked properly at the island’s shore and how the clouds above added stun to the sight! :D The island’s just small, with no cottages and/or trees around. It’s just a mere area of white sand, probably the highest area on this part of the sea. 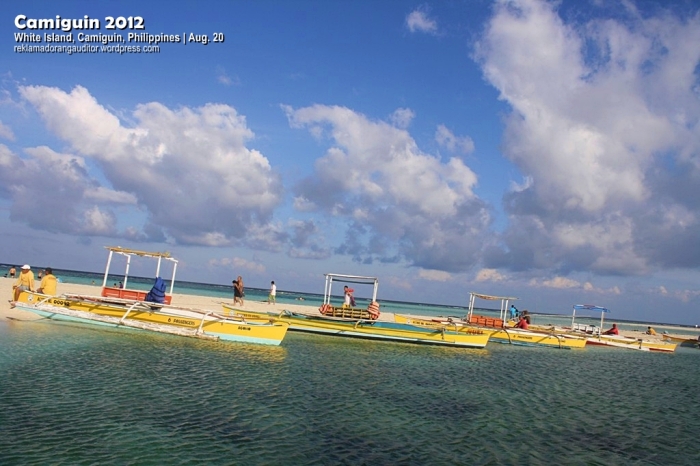 It was a Saturday and a long weekend, so there’s quite a number of visitors in this little island who did their cam-whoring as well. And then the usual, picture-picture muna for a few minutes, before we decided to take a dip!

Who could resist such a wonderful island?! Little did I care about how scorching hot it was; I love the sun, and so I love my tan! Hahaha! Besides, I’m on vacation and so I let go of all worries and just enjoyed the island and the sun! :) 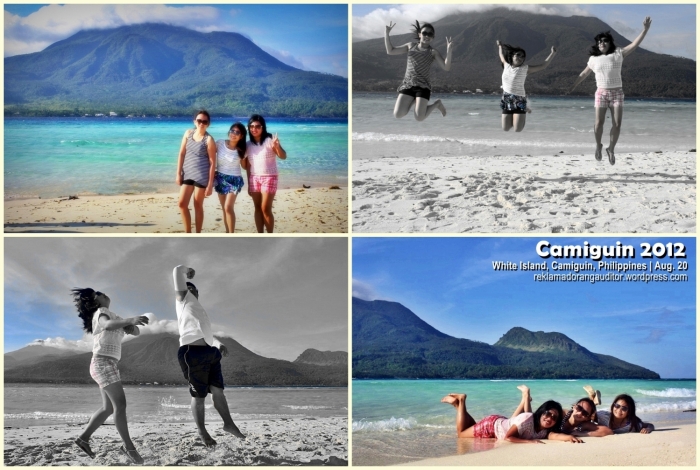 Ain’t it obvious that we were all excited and happy about this island? Hehehe!

So hayun walang mga isda and corals!!! :D Kaya swimming with our life vest ang naging peg namin! Hehehe! Look at how shallow the water is, and we were struggling with the underwater shot because of our lifevests! ehehe! Ang saya lang haha! And oh, little did I care about my red visitor! Haha! game on! :D

These all happened within an hour or less of our stay in White Island! When we felt like our skin is already suffering from the sun’s torturing heat, sabayan pa ng feeling and looking crazy snorkeling around the area which had no corals and schools of fish in it, we decided to leave the beautiful island and move on to our next stop…

At around 10am, we reached Katibawasan Falls. This is one of the many falls in Camiguin that are frequently visited by tourists. As much as I would like to take a dip in this falls, I just can’t hehe! #femalepains! 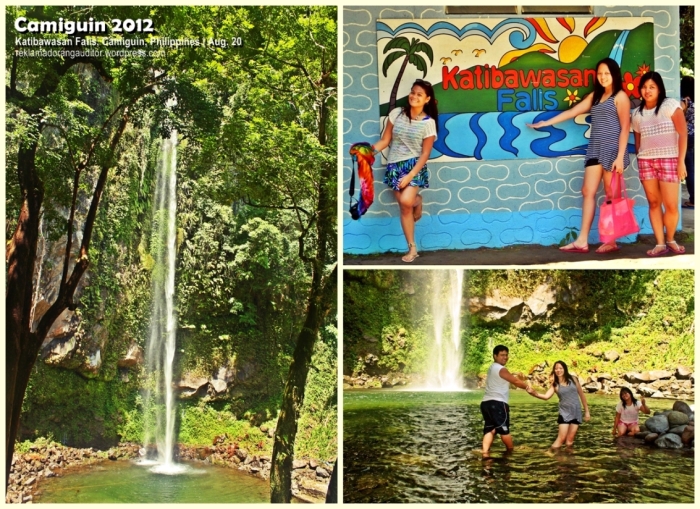 My friends didn’t also swim in Katibawasan; we just got a feel of the cool waters and did some picture-taking afterwards.

Actually, we didn’t stay long in this spot—just about 30 minutes and we were off to our next stop, which was Mantique Island!

An Hour at the Equally-Breathtaking Mantigue Island

11am and the sun’s almost at its highest level—hiyesss! The heat’s too painful for the skin and for the eyes! (arte lang?! hehe!) And yes, look at how dark my face has become after having basked under the sun at White Island! :D

After a few minutes of boat ride, again we were in awe upon seeing this wondrous sight! Like the White Island, Mantigue also has white fine sand, clear waters reflecting the sky’s hue of blue… Paradise in Camiguin huh? :) 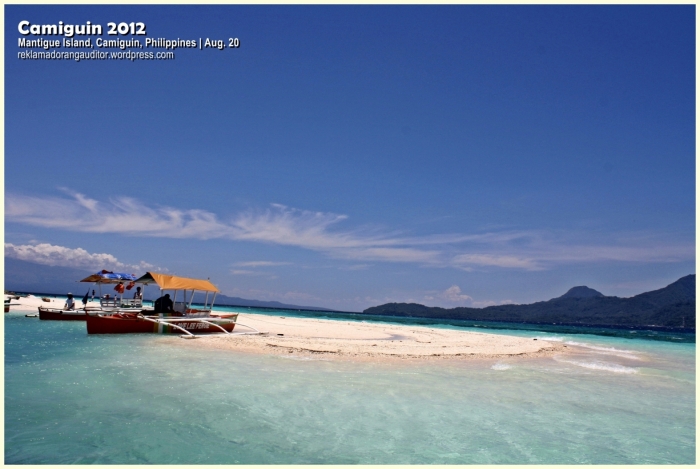 The difference between White Island and Mantigue is that Mantigue has cottages and a little store and toilets, which White Island didn’t have. Mantigue is larger in terms of land area. As to the waters, Mantigue’s got strong waves so it’s a bit scary to go further from the shore hhehe! :D

Like in White Island, Mantigue’s too good to resist! So with no hesitations, not even minding how scorching hot it was considering it’s already noontime, we took a swim and just enjoyed the island to ourselves.

There were only a few people that time in the island, and I think we were the only ones swimming! Hehehe Probably, they were all too afraid to get their skin burned hehehe!

After an hour of staying in the island, we decided to leave as we had to catch an afternoon ferry trip back to CdO. We went back to Pabualan Cottage to change our clothes and prep to leave. When we were all set, Kuya Randy suggested a good place where we could take our lunch before our trip—we dined in at J&A Fishpen Restaurant.

The resto serves seafood and a variety of other dishes. The place’s ambiance is cozy and the view at the side of the resto is nice. Unfortunately, we weren’t able to get some pictures of the surrounding view of the resto as we were all so hungry and we were quite in a hurry to catch the trip.

And so we missed the 3pm trip! Good thing, there was a 3:30pm trip to CdO so we had to wait for around 30 minutes at the port. Notice how dark we’re become after all the basking under the heat of the sun! hehehe!

After 2 hours, at around 5:30, we were back in Balingoan Port! Again we were fetched by Kuya John who took us back to Victoria Suites in CdO. It took us around 2 hours to travel back to CdO and the roads a bit bumpy and traffic was heavy. We were all dead tired that most of the time, we were asleep despite the bumpy ride hehe!

So that’s how we spent day 3 of the 4D3N CdO-Bukidnon-Camiguin trip! Our stay in Camiguin was all worth it!

CORON: Island Hopping and Snorkeling Even if it’s Raining!

2 thoughts on “Camiguin (Part 2 of 2): Two Islands, A Waterfall and Our Sun-kissed Skin”