I am back with my red backpack!!! 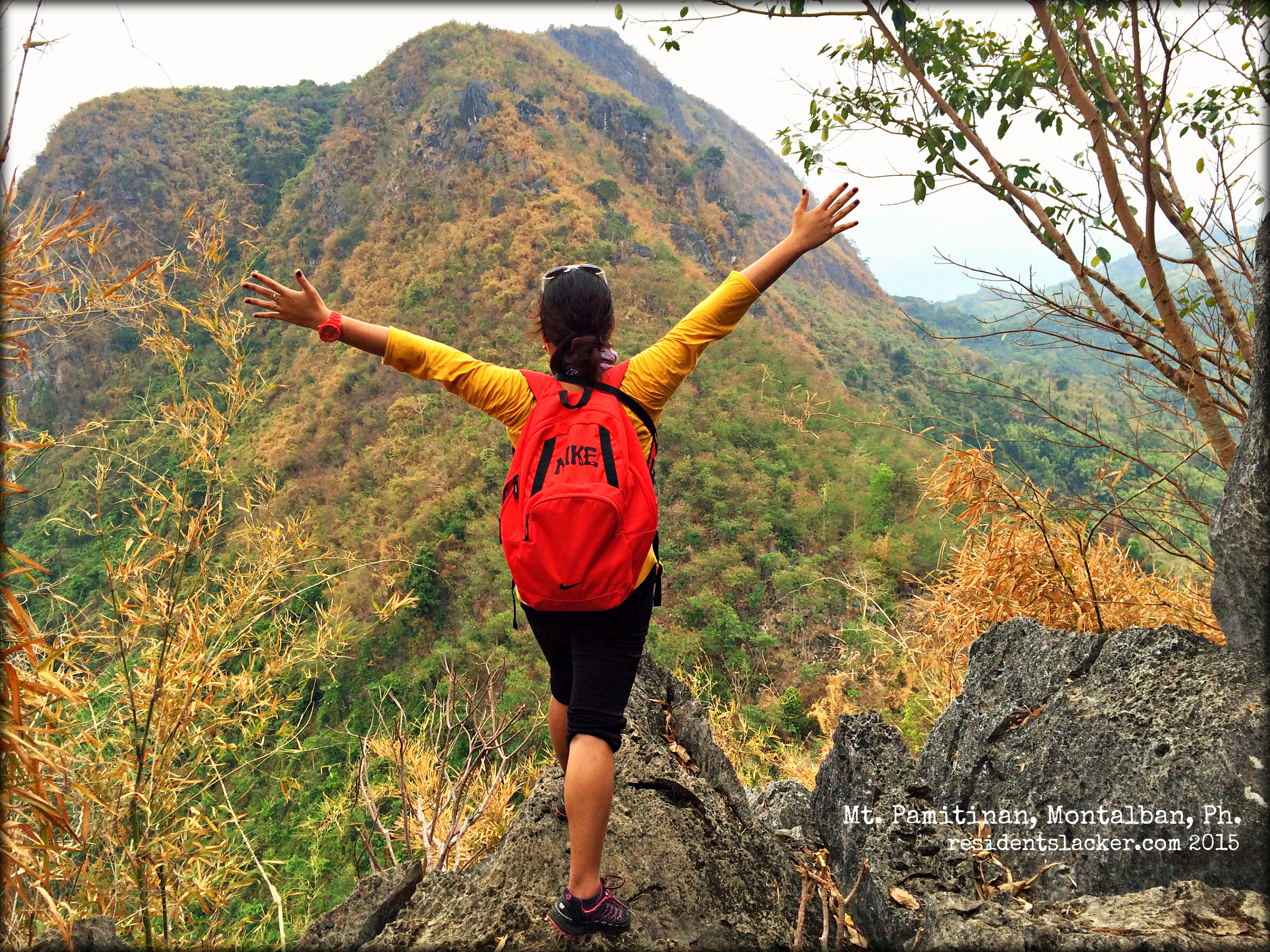 Alright, I am back in the Ph for a short vacation, after 18 months of being away! And because I couldn’t find a direct flight from Manila to my hometown, Zamboanga, on the same day I arrived in Manila from Lunndunn (London), I decided to stay over for another day.

I was actually ok with not having to fly right away to Zamboanga, because that way, I would still have time to do some retail therapy (ehem! as if!) in Manila, watch a local film and of course, go for a day tour to a not-so-far-away destination; so the dayhike happened with one of my good (Manila-based) friends, Klou.

Mt. Pamitinan in Montalban was actually a suggestion of Ronn, the friend that I met during our Mt. Talamitam–Mt. Batulao Twinhike back in 2012, and who served as our tour guide during our Mt. Pico de Loro Dayhike in 2013. As I didn’t think I could do a Pamitinan-Binacayan twinhike (given my hiatus in mountain climbing, as if!), we opted for the less difficult trail as a starter. :p 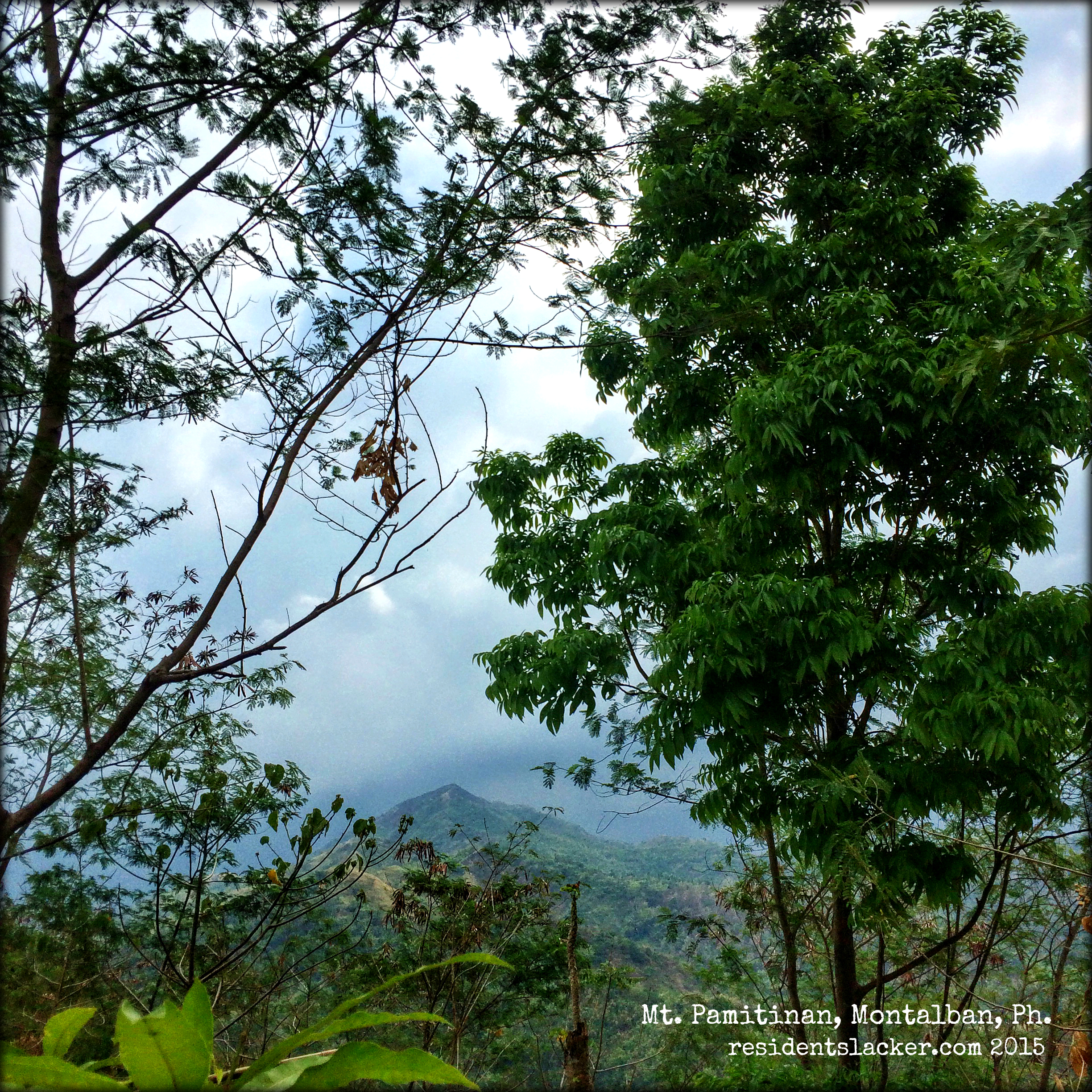 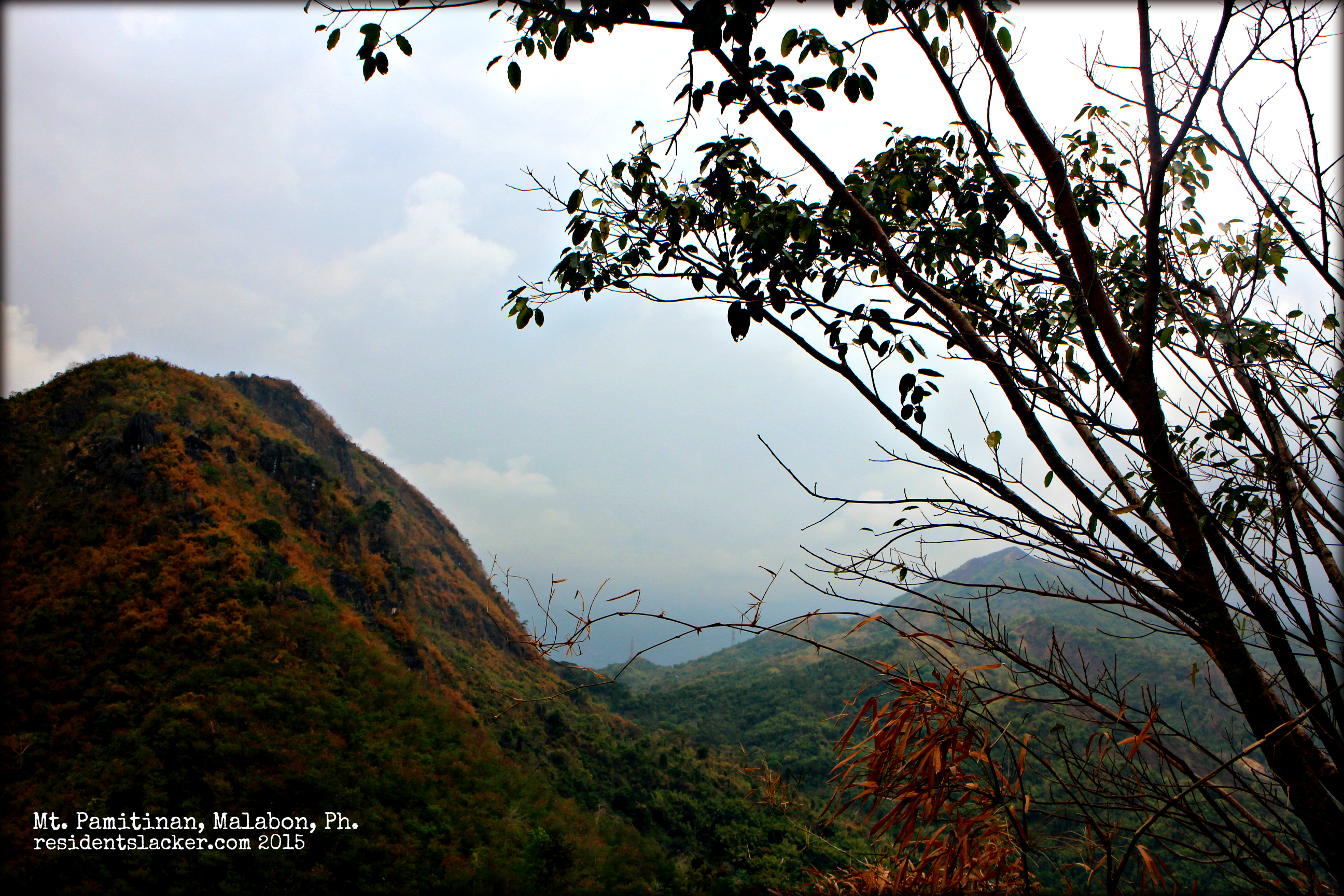 It wasn’t the best weather for a hike because it was drizzling when we started, and the sky was not so blue; t’was because it was initially forecasted that the area of Montalban will be hit by typhoon Chedeng at signal #1 on that day. But thankfully, the drizzle stopped and it didn’t rain for the rest of the hike! And because it was somewhat gloomy, the weather made it less difficult for us to make it through to the summit.

Klou and I were accompanied by our tour guide, Kuya Bernie Quebec, from the Department of Energy and Natural Resources (DENR) office–where we had to register, with a fee of Php2 per person, before we got on to our hike.

After surviving the first set of spiky rocks! *Mt. Banoy as the backdrop*

The first part of the trail was not too steep compared to those that I had hiked on before. But given the fact that I haven’t been working out for x number of months now, I (and more likely Klou as well) easily got tired that we had to hike at a slow pace. And yeah, we had to take a lot of rests in between. :p 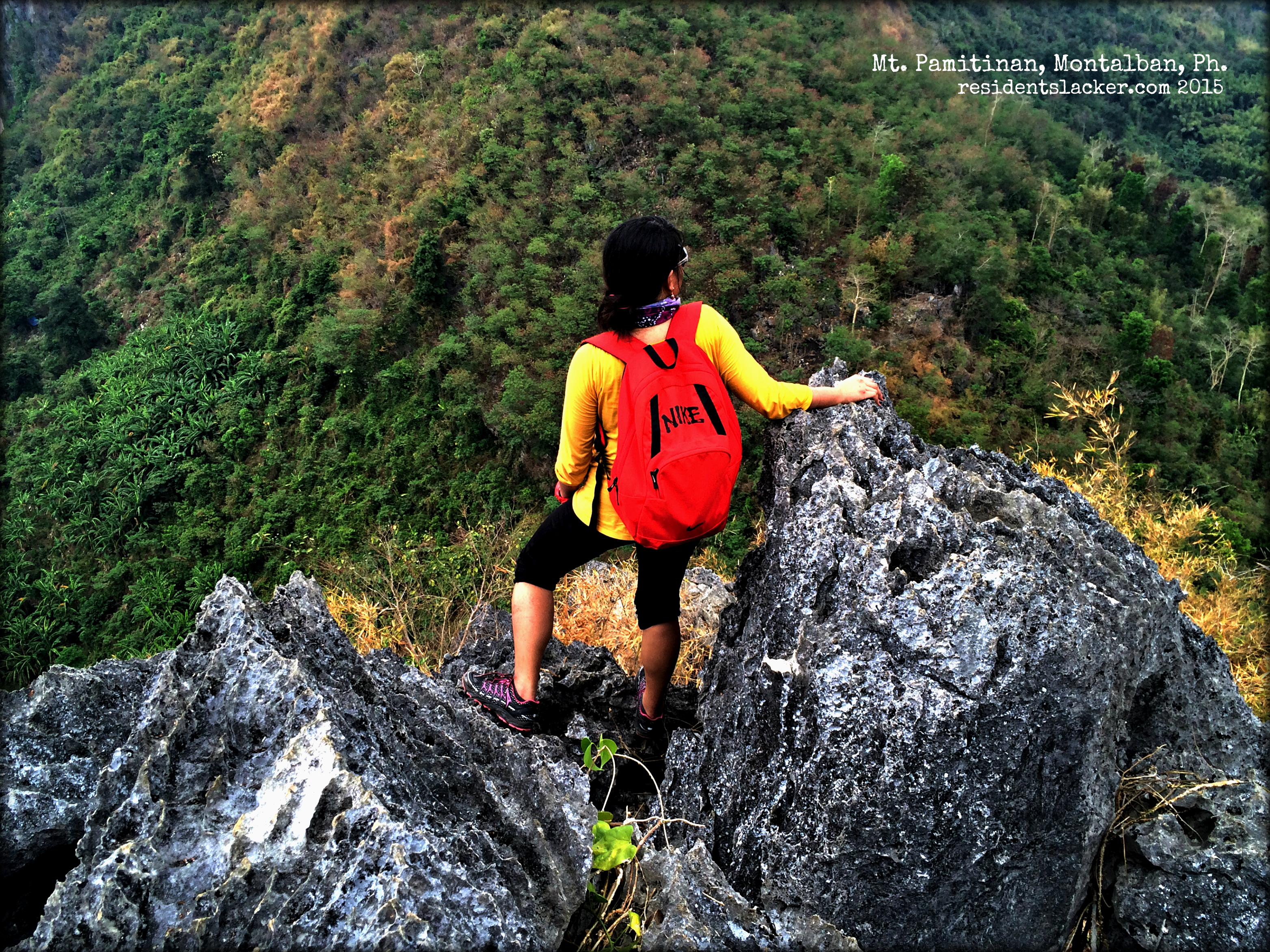 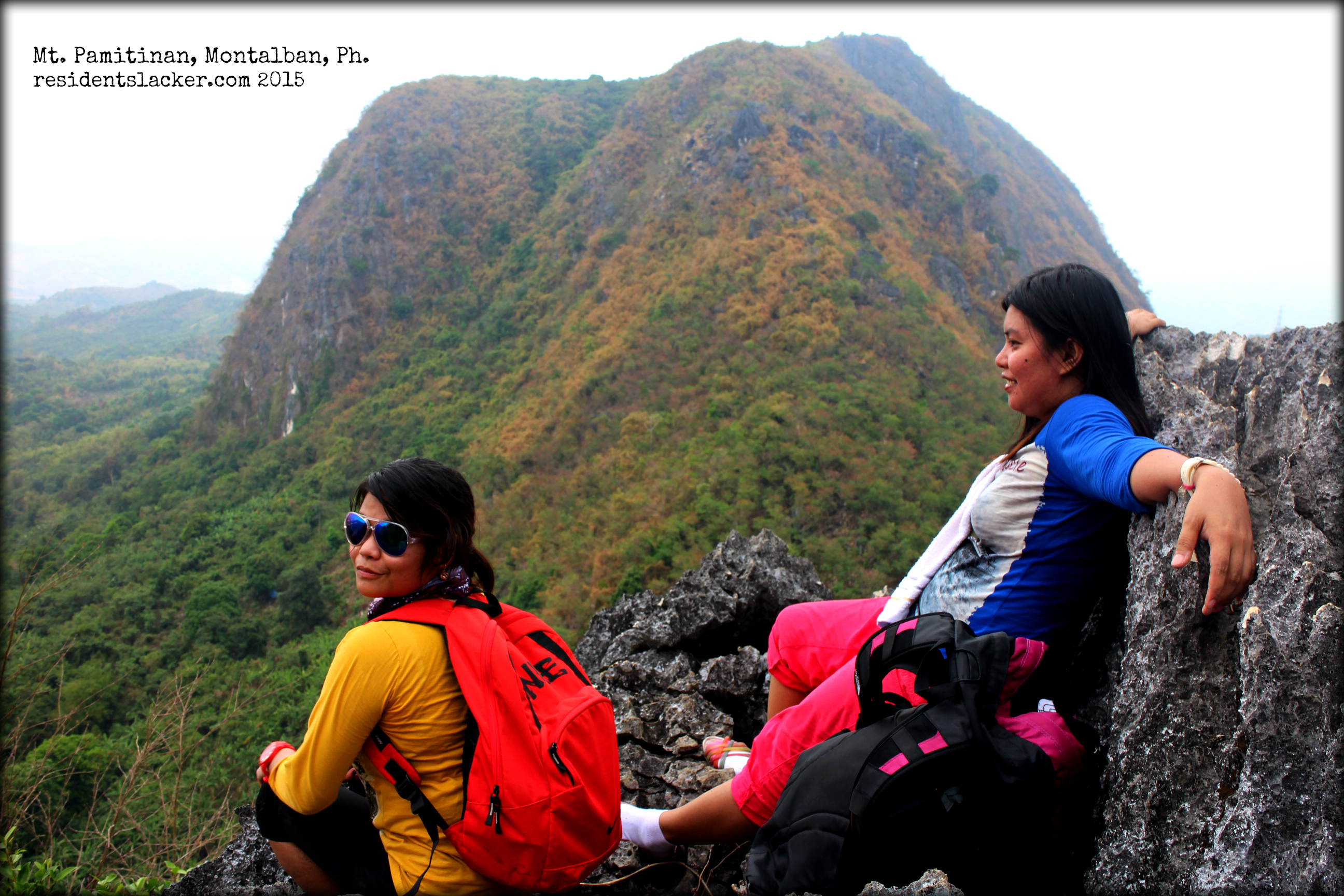 While we were resting, we had a view of some other mountains like Mt. Banoy and the rest of the mountain ranges in Montalban. They were so breath-taking. The view could have been better if the entire sky was blue but well, I couldn’t ask for more! 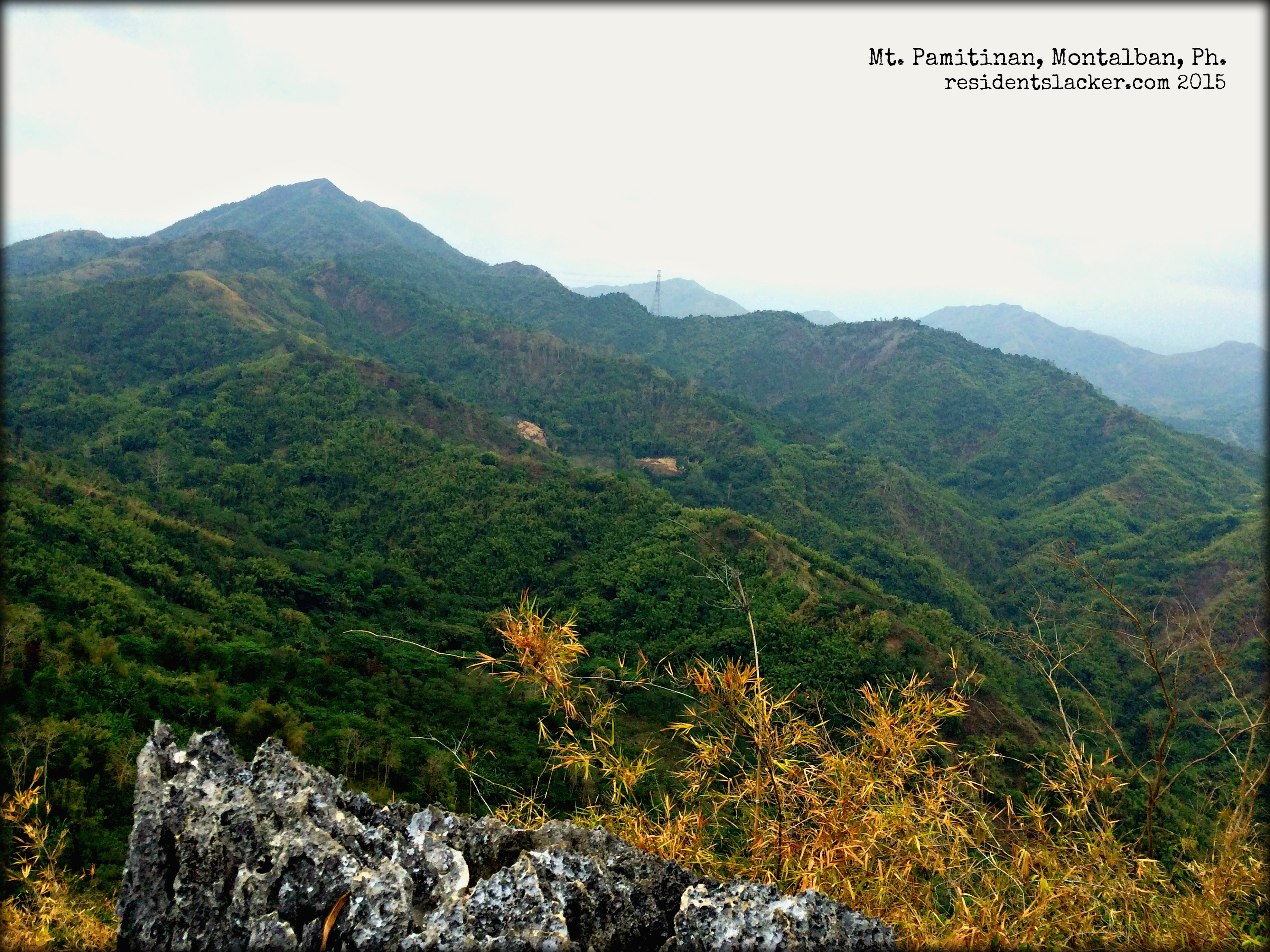 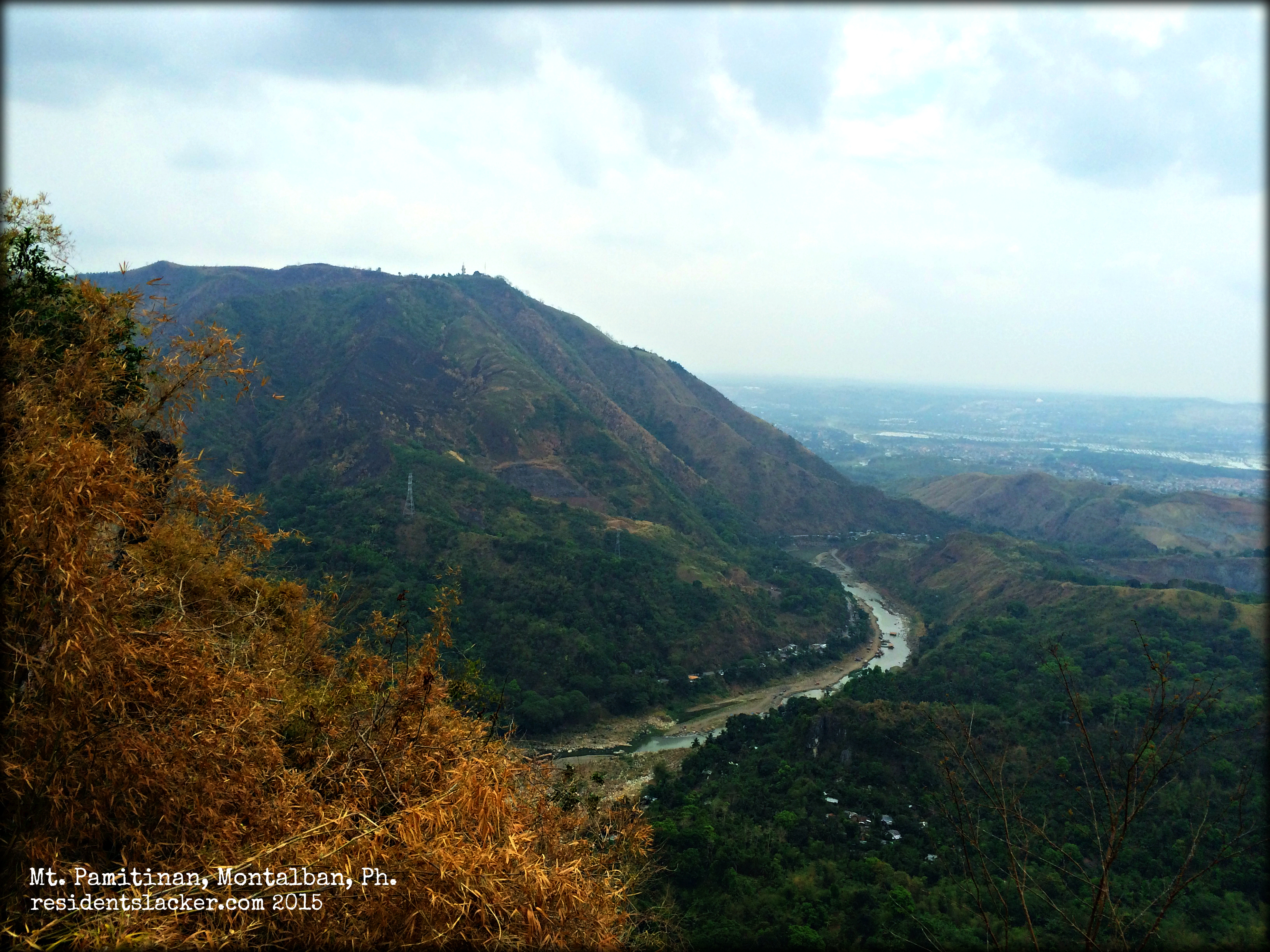 There were the spiky big rocks that we had to climb upon, stretching our legs and grasping as tightly as possible, with our bare hands! I know I’ve read from a blog that gloves should be worn, but I kind of forgot about it, so we were not able to bring a pair or two. It was a bit of a pain! And although we were like “What the heck is this? Think we can’t make it to the summit!”; we still decided to go on. Thanks to our ever patient tour guide for encouraging us as we went along the trail.

Klou’s got a nice pair of “hiking shoes” :p

There were a couple more of big spiky rocks that we encountered along the way. We also met another group of hikers which I found a little bit loud. They seemed to have disturbed our concentration on climbing the tricky big rocks, so I somehow told them off, as a joke (half meant though).

After more climbing, we finally saw the summit! Well, it took us about 2 hours and a half to finally reach the summit and touch the orange flags! Yay! 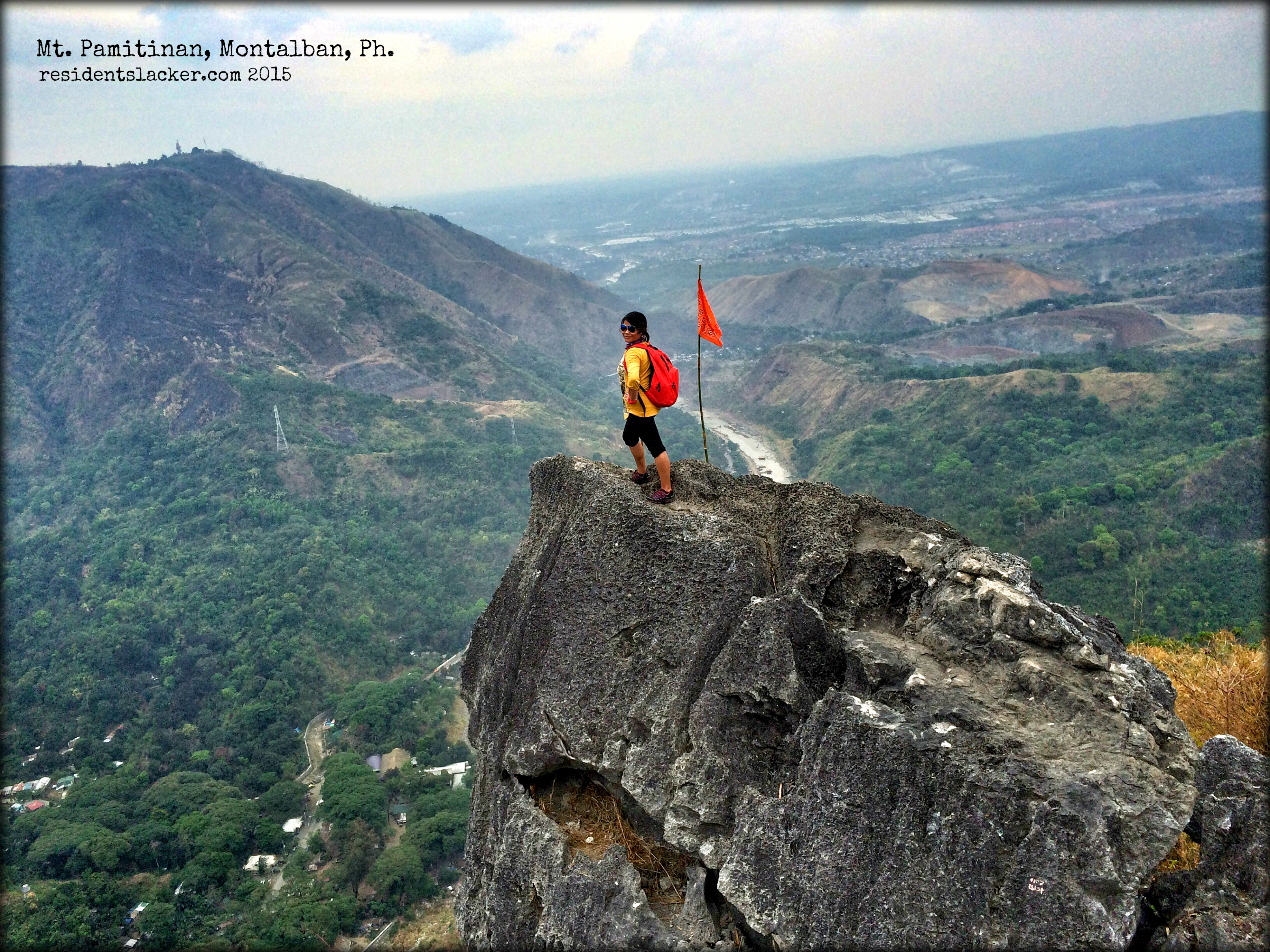 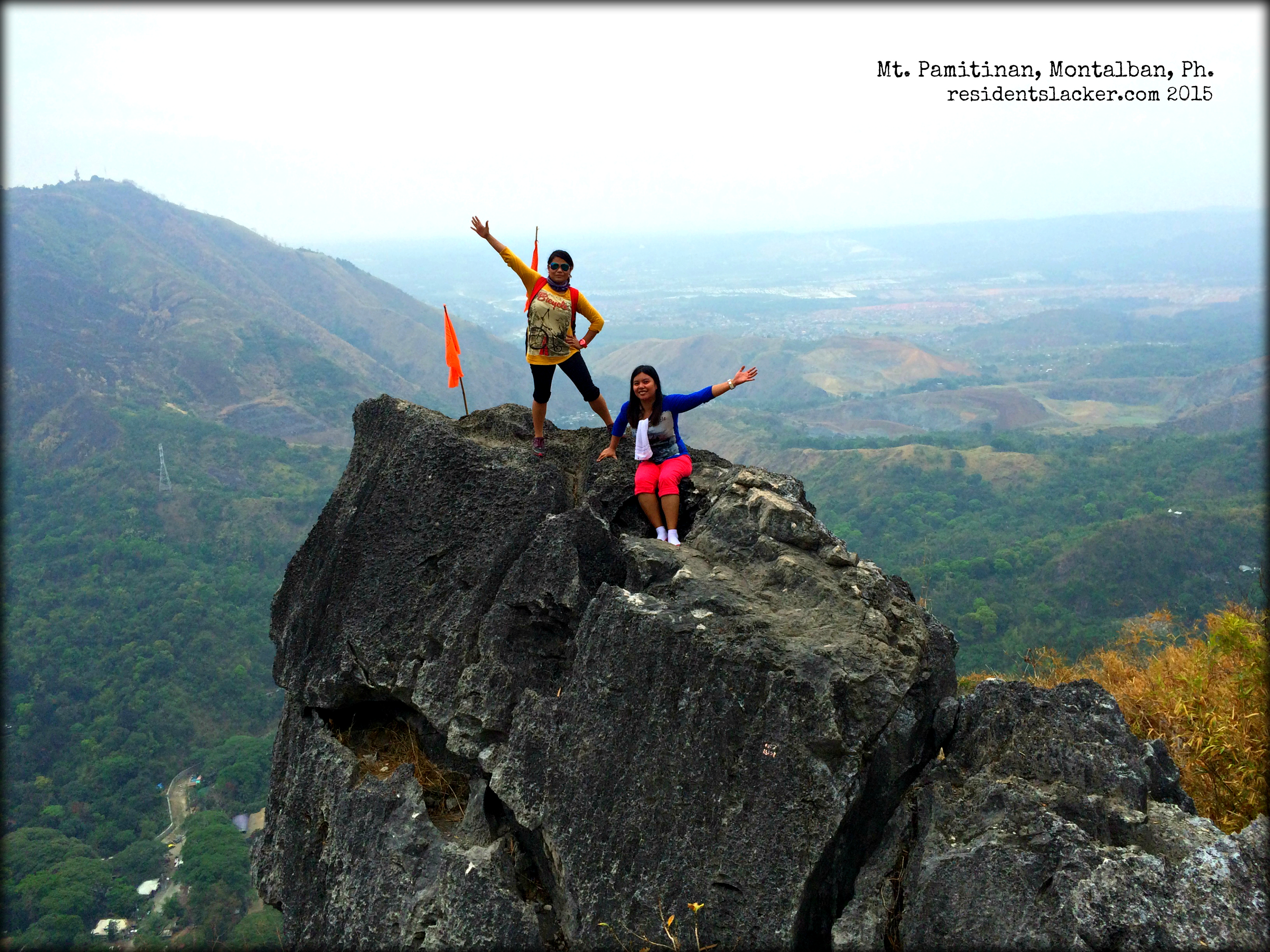 The summit was kind of scary as it doesn’t have much space (accordingly, it can only accommodate about 8 people); add the fact that the surface is not flat! One has to be extra careful to not make the wrong step, otherwise… But it was really fulfilling to be able to reach it as I believe (always believe) that a climb would never be a success if one hasn’t reached the mountain’s summit! Sweet victory! :) 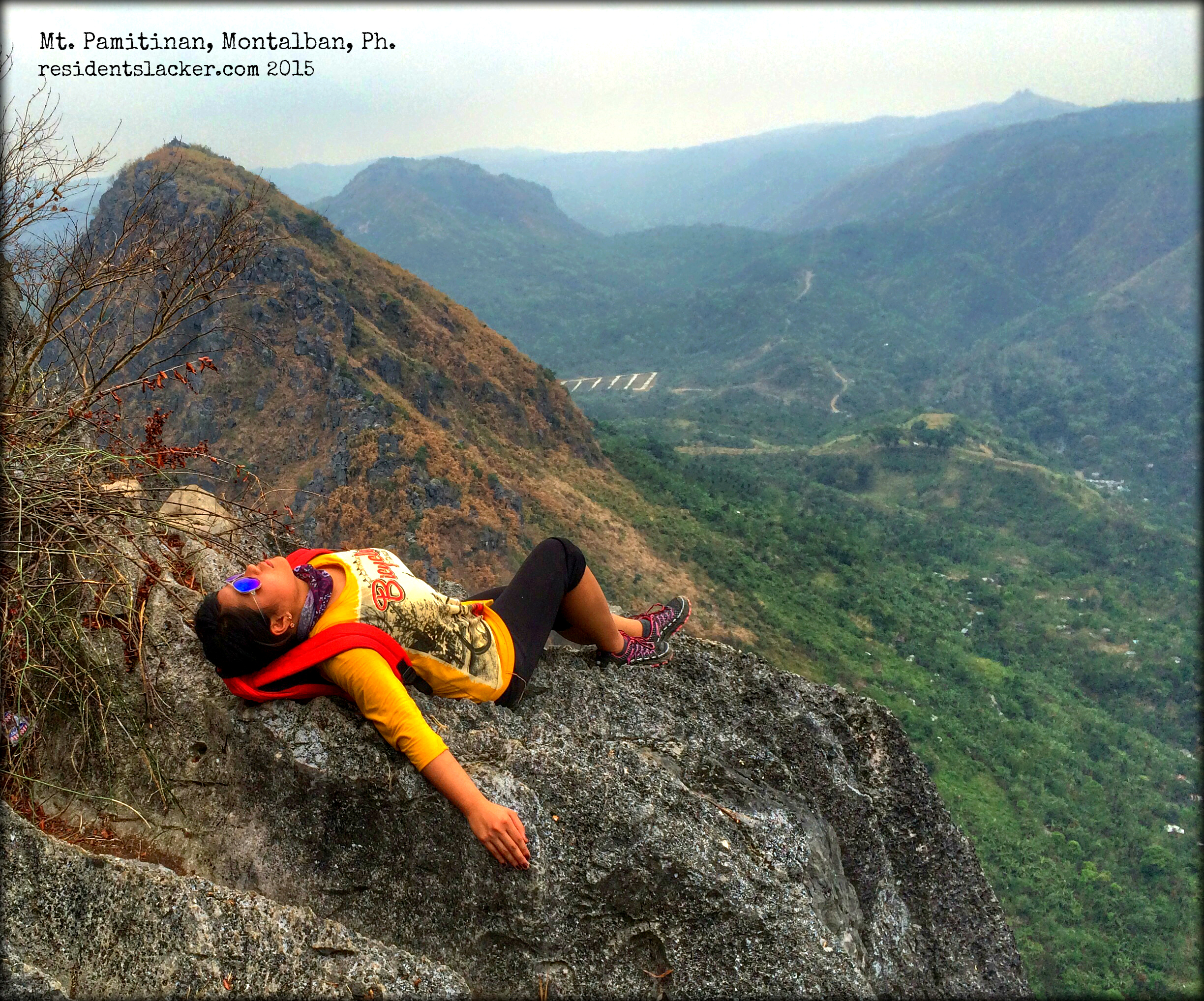 The descent was a lot quicker, but trickier I should say, especially going down on those big spiky rocks. But well, we survived and came out alive! :)

Kuya Bernie took us through a different trail after the big rocks, which led us to a supposed-to-be waterfall, but it was dried up at this summer time. We passed by that part of the Wawa River where people go to for a swim. We stopped for a while in one of the eateries to grab a quick (late) lunch before heading back to the DENR office, where we started off our trek. 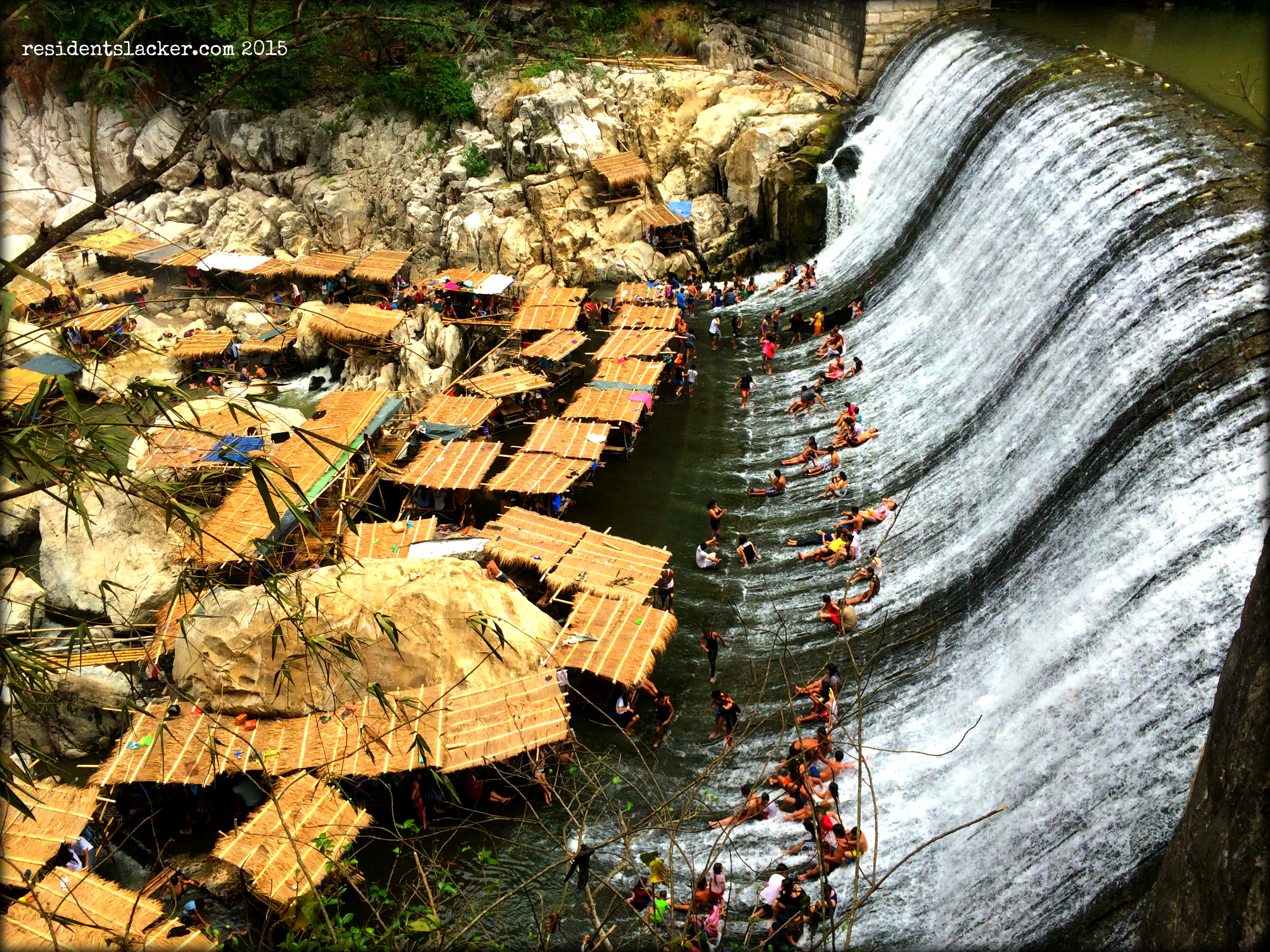 It was a fulfilling day indeed having the chance to get back to the mountains! And yes, another Philippine mountain conquered! :D

Date of Travel: April 5, 2015
Location: Mt. Pamitinan, Montalban, Philippines
How to get there: Take an FX bound for Montalban Eastwood (located at the street going to the Araneta Gateway, corner EDSA). Fare is Php50. Then take a tricycle to DENR, near Wawa River (Php60 for an exclusive trip; otherwise, fare would be about Php10-15 per person). You have to register at DENR (Php2 registration fee), and they will provide you with a tour guide.
Tour Guide Fee: Voluntary amount (We gave our tour guide Php600, for the two of us, which I think was a bit generous :p, after reading a number of blogs about the same hike)