I originally planned for this trip last August 2012 (in time for my first homecoming) as a backup plan for the (failed) Mt. Pulag trip. However, due to the many typhoons that hit my beloved Philippines (particularly in Luzon) during that month, even this back up plan was an epic fail! :/

Came November, when I finally knew I’d be coming home because I already tendered my resignation, I invited two high school classmates, Fern and Jill, for a backpack trip, wherein both opted for hiking instead of beach bumming. Actually, the two were my companions during my Pinatubo hike in December 2011 ;) (madaling ayain eh! hehe!). I also invited some former officemates but I didn’t get my hopes high on that, mukhang malabo haha!

But then a week before the trip, Fern backed out because of a sudden work assignment outside of the PH, and (as expected) my former officemates backed out also. So because I’m left with Jillian, I have to cancel the trip kase dalawa na lang kame and we’re both girls; mahirap, baka anu pang mangyari samin.

But then again, another twist of event happened. Chad, a former officemate who initially backed out, suggested getting on with the hike; and so I had to invite again Jill, and brought along another one, Gaily. To cut the story short, natuloy ang trip, with me, Chad, Jill and Gail! :)

And so we woke up as early as 4am, to catch the 5am bus ride to Nasugbu. Pero ang totoo, almost 6am na kame nakasakay haha! May na-late kase! ;p It was raining hard when we reached Tagaytay, and I was thinking of a backup plan in case the rain would not stop. Honestly, I had no backup plan in mind! Hahaha! Thank heavens, drizzle na lang when we got down at Km. 83, Nasugbu Batangas.

Before we could officially start with the hike, we stopped at a nearby house—–as we were told that we need to register and we need to get a “guider” (hehehe as they term it. =p). Yes, we need to get a guide to take us to the summit of Talamitam. So we stopped, registered, and oh! We had our breakfast (needed some energy for the hike! Hehe!)

Started at past 9am, mataas na sikat ng araw. We were behind schedule, so I was a little bit worried we might run out of daylight in Batulao. Hike. Hike. Hike. We were accompanied by our guides, Oliver and John Michael (I’m guessing the latter’s name! hehehe! But that’s what comes into mind haha!).

After a couple of minutes, or an hour, basta, after getting a little tired hiking, we stopped at some plain field, where we had a view of Mt. Batulao. And so the camwhoring began! :D

We’ve had a nice view of Mt. Batulao, but during this time, we had no idea about camping at Batulao! Wala sa plano, pero…. (Saka na kwento, sa next post ko! =p)

That’s the summit of Mt. Talamitam; rest rest muna, before we ascended to the summit. Look at us, I mean, do we look like we’re on for a trek?! Hahaha! Para lang kameng nagpepetiks stroll eh, sa outfit pa lang! ;p Anyway, it was at this point that Gail gave up. Hahaha! She didn’t want to continue the hike to the summit, so she stayed at this spot with one of the guides. Good decision na rin yun, may magbabantay ng mga bags namin, na ayaw na naming bitbitin papuntang summit ehehe! ;p

After getting enough energy, we continued with our ascent to the summit. This guide of ours (Oliver) made us pass the difficult trail, eh meron namang mas madali haha! lakas mang-trip eh! We only knew about the easy trail on our descent! hmp!

At the Summit – What to do?

Basically, you just have to have fun and savor every moment at the summit haha! Seriously, it’s a good spot to enjoy the view of clouds, sky, earth, green plain field, sight of other mountains nearby, while the cold breeze swept our tiredness away… Ganun lang, pero it can give you a whole lot of positive vibes! ;p

Now here are some of the things we did at the summit…But they all come down to one thing: camwhoring! Hahaha! :D

Hiyes! I brought my tripod, for group shots. But turned out kame lang ni Chad nakinabang, for the most part of the camwhoring session. Gaily, as mentioned, didn’t make it to the summit. Jillian, on the other hand, had her own world—-haha ayaw maki-join sa pikchuran namin except that shot at Mt. Talamitam’s famous spot. :) While Oliver, our guide, had his own quiet moment at the summit haha! Wala nang paki samin eh! ;)

Because no one else cared to do a group shot, or at least join us in our camwhoring session, Chad and I took turns at taking photos here at the summit haha! Mukhang dalawa lang kame nag-hike eh! Told you, the view of the clouds, mountains, sky, are all worth the heat and long trail! :D

[3] Buwis-buhay poses at the edge

Ahh one of the most famous camwhoring spots at Mt. Talamitam’s summit! And so these were our moments at the edge, careful enough to not trip over and fall down the cliff. Nag-jumpshot pa eh! hahaha! 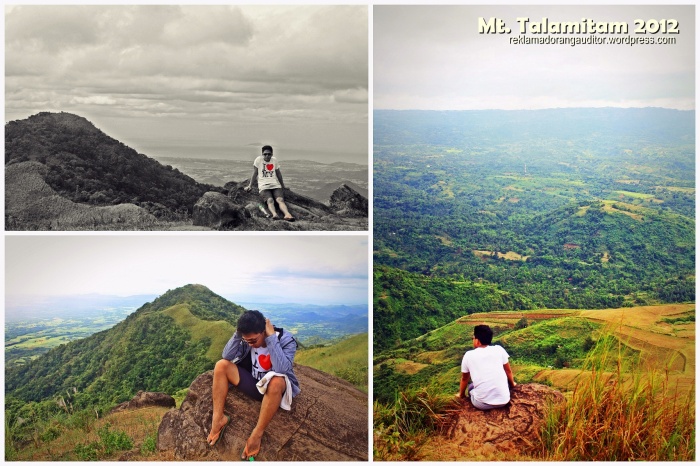 Tamang trip lang hahaha! I love these emo poses of Chad! :D Winner sa pag-project eh! Hahaha! Bigay-todo! =p Thanks for giving me the opportunity to take some emo shots of you, emo-boy! hahahaha!

That’s what we basically did at the summit, we had fun, obviously. :D Yes, it was fun. And well, before forgetting, it was at this summit that we got to meet two other hikers, Kuya Dan and Ronn, who were also doing a Talamitam-Batulao twin hike.

It was during the conversation with them at the summit that they suggested that we join them in their camping at Mt. Batulao. They offered us to share their tents with us; though we were a little hesitant, eventually, we were convinced. Hehehe! Mukhang Masaya mag-camping eh, biglaan, wala sa plano!

On our descent, 6 na kame, from the original 4. Petiks hike on our way down, pikchur pikchur ng konti…

Petiks hike, rested in between, inom ng coke in one of the stores at Km. 83, before we headed on to our next trip. The 6 of us rode on a jeepney bound for Evercrest—the start off point for the Mt. Batulao hike. When we got down, we took our super late lunch at a nearby carinderia first (80’s 80ry – Ochenta’s Eatery hahaha!), bought food since we were going to camp, and some alcohol for the socials haha! May ganun?! :D